Posted on October 12, 2015 by picturesinpowell

Reading Remembrance of Things Past one night in bed, Jenkins is struck by a passage that he quotes extensively.  The writing is typically Proustian:  a memoir of a conversation that The Narrator had with the Turkish Ambassadress at a party given by a Princesse, replete with myriad characters, seemingly endless subordinate clauses, gossipy asides about a Prince Odoacer, and parenthetical digressions. [MP 124-125/119-121 ]

Powell has often been called the British Proust because both Dance and Remembrance are long novels, reminiscences of time and milieu,  in which haut bourgeois narrators recall their lives among the aristocratic and cultured. Powell, the perceptive critic, dismissed the analogy in The Paris Review (1978) :

Could we just settle the comparison to Proust? I believe you reject it?

Well, I do to this extent: that I’m a great admirer of Proust and know his works very well. But the essential difference is that Proust is an enormously subjective writer who has a peculiar genius for describing how he or his narrator feels. Well, I really tell people a minimum of what my narrator feels—just enough to keep the narrative going—because I have no talent for that particular sort of self-revelation.

The painting references in the passage quoted by Jenkins are to a “hunting scene by Wouwerman” and to La Gioconda,  the nickname given to a youth by “his fellow inverts. ”

We first realized that the Proust text is a pastiche, or as Spurling says,  a passage that “seems to be known only to Nicholas Jenkins” (Invitation to the Dance, p. 542), when we found that Proust mentions neither La Gioconda (The Mona Lisa) nor  Philips Wouwerman (1619-1668), a master of the Dutch Golden Age, especially noted for his portrayal of horses in military and hunting scenes.  Proust does pay homage to other Golden Age painters, like Rembrandt, Vermeer, and Wouwerman’s teacher Hals.

Powell draws attention to the homosexual motif in Remembrance by having Proust’s Narrator hear La Gioconda as the nickname for a young man.  Da Vinci painted Mona Lisa ostensibly as a portrait of  Lisa Gherardini, the wife of Francesco del Giocondo, but one of many theories about the actual model names him as Gian Giacomo Caprotti, Leonardo’s long-time apprentice. Da Vinci’s painting of Saint John the Baptist, shown below, was modeled on Caprotti and has some resemblance to Mona Lisa. Scholars in Proust’s time wrote of Leonardo’s suspected homosexuality and possible relationship with Caprotti (CJ Farago ed Biography and Early Art Criticism of Leonardo Da Vinci U. Of Chicago 1999). 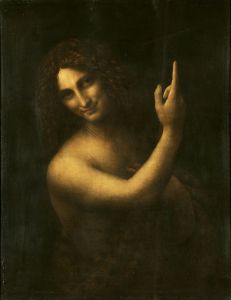 We are among those guilty of speculating about the actual person who serves as an artist’s or novelist’s model. After “quoting” Proust, Powell teases those who search for real counterparts of fictional characters; Jenkins says:

This description of Prince Odoacer was of special interest because he was a relation — possibly a great-uncle — of Theodoric’s. I thought about the party for a time, whether there had really been a Turkish Ambassadress, whom Proust found a great bore; then, like the Narrator himself in his childhood days, fell asleep early. [MP 125/121 ].

Of course, there is no Prince Odoacer in Remembrance.  The historical Theodoric the Great, king of the Ostrogoths from 475 to 526, assinated Odoacer, king of Italy, in 493.