Posted on November 19, 2014 by picturesinpowell

Admiring a waitress at Casanova’s Chinese Restaurant, Barnby proposes to ask her to model for him. Moreland says: “I don’t quite see her in your medium, but that is obviously the painter’s own affair. If I have a passion for anyone, I prefer an academic, even pedestrian, naturalism of portraiture. It is a limitation I share with Edgar Deacon. Nothing I’d care for less than to have my girl painted by Lhote or Gleizes, however much I may admire those painters — literally–in the abstract.”[CCR 39/ ]

André Lhote (1885-1962) was a French artist who began his career as a woodworker and sculptor, experimented with Fauvism. and later adopted Cubism. We think that angularity of the intersecting planes in this work is what Moreland disliked for his women, and he was not necessarily thinking of other works in which Lhote could be more realitstic (see his Nude in the Glasgow Museum.) 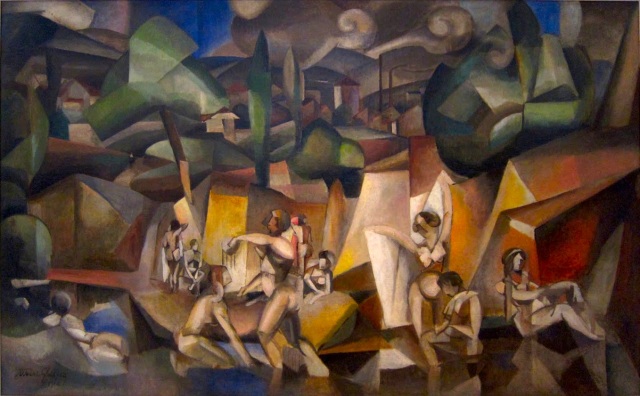 Albert Gleizes (1881-1953), like Lhote, was a French painter; his style evolved to Cubism after passing through Impressionist, Post-Impressionist, and Fauvist phases. His book  Du “Cubisme”(1912), written with Jean Metzinger, is now considered the first theoretical description of Cubism, but we do not need the literature on the geometrical explorations of the Cubists to understand Moreland’s love of the natural female form.

Many references to visual art in Dance show how different personalities react to the tension between older and avant-garde art.  Initially, we viewed Moreland’s reaction to Cubism only as another example of this motif; however, after learning Moreland’s views on Rembrandt, we venture an additional interpretation.

Moreland comes back to painterly views of women, which Jenkins reports when they go to meet the beautiful and intelligent Matilda Wilson backstage. “I don’t want what Rembrandt or Cézanne or Barnby or any other painter may happen to want….I simply cling to my own preferences. I don’t know what’s good, but I know what I like– not a lot of intellectual snobbery about fat peasant women, or technical talk about masses or planes. After all, painters have to contend professionally with pictorial aspects of the eternal feminine which are quite beside the point when a musician like myself is concerned. ” [CCR 48-49/ ]

We need not provide a brief bio of Rembrandt ( 1606-1669), but we do need to reexamine what Moreland is saying when he complains about painters’ depictions of woman. If he is dissatisfied with Rembrandt, his quarrel is not about distortions of woman’s bodies, but rather with the ability of the most talented, psychologically intense, and realistic visual artists to truly convey an understanding of women. The Girl in the Window is so realistic that passersby mistook her for a live woman when Rembrandt displayed her in his own window.  Furthermore, Cézanne, for all his emphasis on building his paintings from basic geometrical forms, painted a woman realistically enough that the viewer could spend hours speculating about her thoughts.

Moreland says, “With women I can afford to cut out the chiascuro…” Chiascuro refers to using strong contrasts of light and dark to achieve visual emphasis.  Rembrandt followed Carvaggio and DaVinci and did this superbly. The chiascuro in Girl at the Window is not as striking as in many other Rembrandt paintings, but the lighting emphasizes her face, making her both more visible and more enigmatic.

With Moreland’s views, Powell is returning to a theme in Dance, the ability of the writer to delineate personality by following the evolution of a lover (or any other character) over a lifetime. We wonder whether the ‘chiascuro’ should be read as a metaphor for seeing things from just one viewpoint, for highlighting an instant, like a camera would with a flash-lit snapshot; Moreland prefers the time-based dynamism of music.

In AW, Nick argued against Barnby’s contention that that great painters exceed writers as protrayers of women. We have already read that neither an Old Master, nor Rubens, nor Delacroix could capture the changing Jean Templar Duport.  Furthermore, neither the Romans nor the best contemporary sculptors could really get Mona.

We are well aware of the danger of assuming that characters speak for their author. We cannot put Nick’s arguments into Powell’s mouth; however, do we believe that Moreland’s preference for music resonates with The Music of Time, in which the way people change over time is more important than how they seem at a single encounter.

Powell loved visual art. He was a painter before he was a writer (see sidebar Anthony Powell — The Artist as a Young Man ).  His reviews in Some Poets, Artists & ‘A Reference for Mellors’ admire many artists, ranging from Classical to Modern.  In our blog we are emphasizing how references to works of art enrich the work; however, Moreland reminds us that single portraits are only one facet of Dance.

This entry was posted in Uncategorized and tagged Albert Gleizes, Moreland. Bookmark the permalink.