Posted on August 9, 2015 by picturesinpowell

Stringham tells Nick about the time Lord Bridgnorth’s butler served macaroni to His Royal Highness the Duke of Connaught but failed to provide a plate on which to eat it. “I shall never forget my ex-father-in-law’s face, richly tinted at the best of times — my late brother-in law, Harrison Wisebit, used to say Lord Bridgnorth’s complexion recalled Our Artist’s Impression of the Hudson in the fall. On that occasion it was more like the Dutch tulip fields in bloom.” [SA 77/ 76]

We are unsure of the identity of “Our Artist,” but perhaps this a reference to The Hudson River School, a group of nineteenth century American painters who presented a dramantic yet realistic vision of American landscape. Thomas Cole (1801-1848) was born in Britain but moved to America, where he founded the movement; Cole wrote: “There is one season when the American forest surpasses all in the world in gorgeousness — that is the autumnal; — then every hill and dale is riant in the luxury of colour — every hue is there, from the liveliest green to the deepest purple from the most golden yellow to the intensest crimson. ” [“Essay on American Scenery” The American Monthly Magazine 1 (January, 1839)] We show a work by Thomas Worthington Whittredge (1820-1910 ), a later member of the Hudson River School, to illustrate how varied those hues can be. 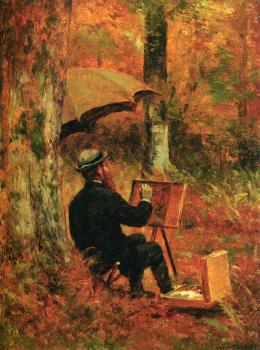 The Artist at His Easel
Thomas Worthington Whittredge ,~1891
oil on paper on panel, 12 x 9 in
Private collection
photo in public domain from The Anthenaeum 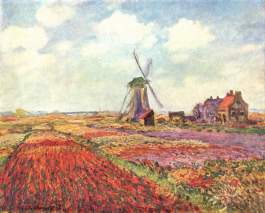 Speaking of tulips fields, the colors of the bed that dominates the lower left of Monet’s canvas shown here might be compared to a ruddy cheek, but our idea of Lord Bridgnorth’s complexion is actually clearer from reading Powell’s words than from seeing the candidate image. Of course, we do not know exactly where on the hot part of the spectrum Lord Bridgenorth glowered, but Powell rather economically uses the visual allusions to convey this emotional heat.

Thinking about color and emotion prompts us to compare Powell’s style to Proust’s much more extravagant treatment of the emotional power of color, his famous passage on the “little patch of yellow wall” that appears in Vermeer’s View of Delft.  One of characters from In Search of Lost Time, the writer Bergotte, goes to the Jeu de Paume to see this painting. Gazing at the painting, “His dizziness increased; he fixed his gaze, like a child upon a yellow butterfly that it wants to catch, on the precious patch of wall. ‘That’s how I ought to have written,’ he said. ‘My last books are too dry, I ought to have gone over them with a few layers of colour, made my language precious in itself, like this little patch of yellow wall.'” (Proust, The Captive (La Prisonnière), volume 5 of À la recherche du temps perdu, C.K, Scott Moncrieff translator.) 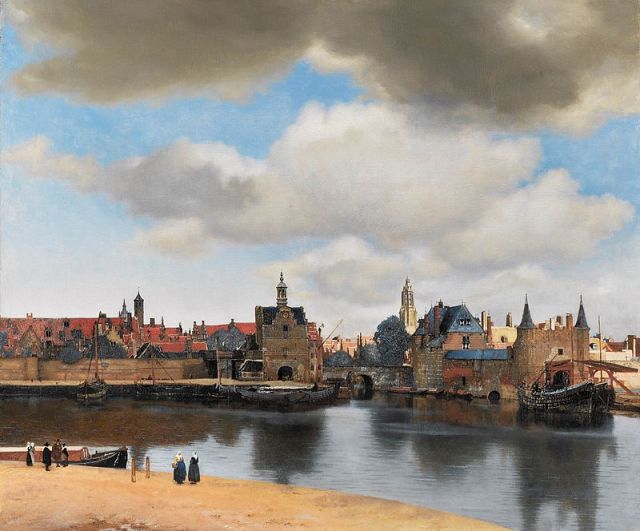 Overcome by the beautiful color, Bergotte slumps dead in front of the painting. Critics debate exactly which dab of yellow in this painting killed Bergotte and how this passage reflects Proust’s own emotional response to the painting.   In The Military Philosophers, Jenkins reflects on Proust, which will give us a chance to return to the Powell-Proust nexus.