Posted on October 12, 2015 by picturesinpowell

Jenkins and Farebrother walk together into Whitehall.

Farebrother suddenly raised his arm in a stiff salute. I did the same, taking my time from him, though not immediately conscious of whom we were both saluting. Then I quickly apprehended that Farebrother was paying tribute to the Cenotaph, which we were at the moment passing.  [MP 121/116] 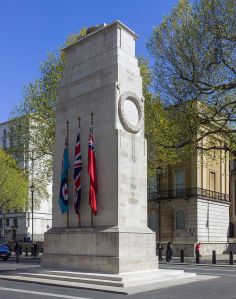 The Cenotaph (Greek for empty tomb) in Whitehall was designed by Sir Edwin Lutyens and executed in Portland Stone by Holland, Hannens & Cubitts, 1919-1920, as a memorial to the dead of the Great War. Lutyens (1869-1944) works ranged from British country houses to monuments of British India, including many of the government buildings in New Delhi. His Cenotaph was much copied, and he designed at least 50 memorials to World War I, including the India Gate, which was designed as the All India War Memorial.

Powell briefly alluded to World War I memorials in BM (see The Haig Statue), but now as World War II is approaching its end, he is repeatedly reminding us of the First World War, also memorialized by Olivier’s paintings and the bust of Kitchener.  The Cenotaph is now seen as a memorial to British military lost in both World Wars and in subsequent conflicts.