Madonna and Child by Benozzo Gozzoli

Posted on November 30, 2014 by picturesinpowell

In support of the artistic ambitions of her protege Norman Chandler, Mrs. Foxe has invited the Huntercombes to her party.  Lord Huntercombe is regarded as a connoisseur of paintings: “He had caught napping one of the best known Bond Street dealers in the matter of a Virgin and Child by Benozzo Gozzoli (acquired from the gallery as the work of a lesser master, later resoundingly identified) . . . . ” [CCR 140/143]

Benozzo Gozzoli (1421-1497) was a Florentine painter of immense output, whose work in fresco and panel painting was commissioned for churches throughout Tuscany,Umbria, Rome, and the Vatican.  Gozzoli was a student of Fra Angelico, whose manner Gozzoli’s early work resembles, but Gozzoli’s long and industrious career saw him though a variety of approaches to image-making, as the examples below suggest. 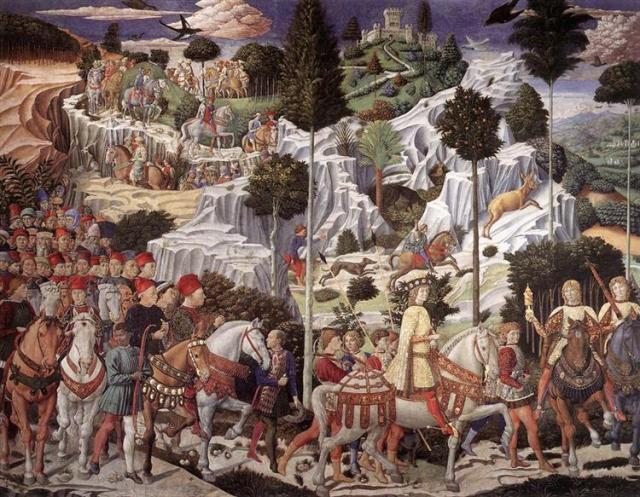 Perhaps it is this variety of styles that accounts for how a knowing amateur like Lord Huntercombe might be able to trump a Bond Street professional in the attribution of a painting by a master so highly regarded.  Two possible models for the Virgin and Child that Lord Huntercombe acquired from the “napping” dealer are small oil on panel (above left), now in the Vienna Kunsthistorisches Museum, or the entirely different different tempera painting on panel (above right), currently in the Detroit Institute of Arts (but for how long?).

The Madonna and Child with Angels
attributed to Benozzo Gozzoli, 1447-1450
Egg tempera on wood, 12 x 9 in
National Gallery, London
photo from c
asa-in-italia.com

But the most likely candidate is the Madonna and Child with Angels in the National Gallery.  Its still slightly uncertain attribution might have been Powell’s inspiration for the Huntercombe anecdote, and its location in London since 1945 makes it the Gozzoli Madonna that Powell’s readers would find most familiar.