At the Isbister Memorial Exhibit

Posted on March 8, 2014 by picturesinpowell

“Pictures, apart from their aesthetic interest, can achieve the mysterious fascination of those enigmatic scrawls on walls, the expression of heaven knows what psychological urge on the part of the executant; for example, the ever anonymous drawing of Widmerpool in the cabinet at La Grenadière.” [AW 113/106]

Jenkins revisits portraits, like that of Lord Aberavon, and also mentions Isbister’s genre paintings, like Clergyman Eating An Apple and The Humorists. In 2007-8 the Royal Academy mounted an exhibition of scenes of the quotidian–  From All Walks of Life: Genre Paintings from the Royal Academ Collection — but so far we have not found a reasonable facsimile for Isbister’s genre oeuvre. We welcome hearing from readers if they have a candidate to show here.

As he wanders through the exhibit, Jenkins meets an number of old friends. Sir Gavin Walpole-Wilson takes some delight that Isbister has painted his old rival Saltsonstall to look like “the Christmas Tree of Taste.” [AW 115/108 ].  Sir Gavin mocks Saltonstall’s pretension as The Man of Taste: ” with his vers de societé, and all his talk about Foujita and Pruna and goodness knows who else — but when it comes to his own portrait, it’s Isbister.’ [AW 116/109]

Léonard Tsuguharu Fujita (1886-1986 ) was a Japanese born painter and print maker who lived in Paris from 1913-1931, achieving some critical and financial success, but he no longer has the name recognition of many of his friends and contemporaries who led the burst of French artistic creativity of that period.

Pedro Pruna (1904-1977) also spent time in Paris and was considered a student of Picasso. His work included costumes and scenery of Diaghilev’s Ballet Russe. Later he returned to Spain and supported Franco.

Sillery is at the exhibit, musing about who should paint his portrait to hang in his College. [AW 119/112] Isbister is no longer available, and the College is too conservative to consider Barnby; in fact, Antonio Moro represents the standard that they want to emulate. Moro (Netherlands 1519-1575), also know as Anthonis Mor van Dashorst,  spent some time in Britain for his portrait of Queen Mary (1554). The portrait we show of Cardinal Granvelle illustrates Moro’s stern formality, which was so appealing to the dons. 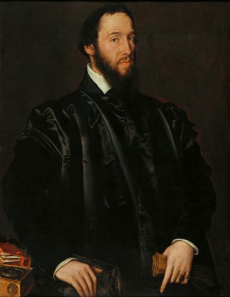 In front of Countess of Ardglass with Faithful Girl, Jenkins sees Lady Ardglass admiring her own portrait. “Isbister had painted her in an open shirt and riding breeches, standing besides the mare, her arms slipped through the reins: with much attention to the high polish of the brown boots.

John William Godward (1861-1922) has been mentioned as a model for Isbister as a portraitist.  Godward was a protege of Alma Tadema. Like Isbister, he was a member of the Royal Academy whose reputation waned with the advent of Modernism. Unlike Isbister, the vast majority of Godward’s subjects were women in Greco-Roman settings. He did not seem to paint horsewomen in brown boots; undoubtedly, however, he could have captured Bijou Ardglass’ allure.