The Narrator recalls his first glimpse of Peter Templer’s sister Jean: “her face was thin and attenuated, the whole appearance given the effect of a much simplified — and somewhat self-conscious — arrangement of lines and planes, such as might be found in an Old Master drawing, Flemish or German perhaps, depicting some young and virginal saint; the raquet, held awkwardly at an angle to her body, suggesting at the same time an obscure implement associated with martyrdom.” (QU 75)

Jean’s appearance is more of a mystery than Stringham’s, who begins from a model of an actual friend of Powell’s, likened to a specifically identified portrait by Veronese.  But Powell’s memoir is much less forthright about any romantic interest beyond his wife, and his evocation of Jean Templer is suitably and deliberately elusive. It would be a fool’s errand to try to nail down Jean’s image in art, but we tried to identify the class of images that Nick imagines when he first meets Jean.

Saint Barbara
by Master FVB (fl. between 1475 and 1500) [Public domain], via Wikimedia Commons

The Narrator seems to be recalling a Northern Mannerist work with long bodies derived from the gothic tradition. We chose this late-15th century Flemish wood engraving of Saint Barbara to illustrate the simplified lines and planes to which he alludes.  Saint Barbara herself—whose muddled story of doubtful authenticity dates from about the 7th c. AD—bears no resemblance to Jean’s story.  But her bodily proportions are at once child-like and elegant, her pose both charming and slightly awkward.

The Narrator goes on to say: “The expression of her face, although sad and a trifle ironical, was not altogether in keeping with this air of belonging to another and better world.  I felt suddenly uneasy and also interested:  a desire to be with her, and at the same time, and almost paralyzing  disquiet at her presence.” 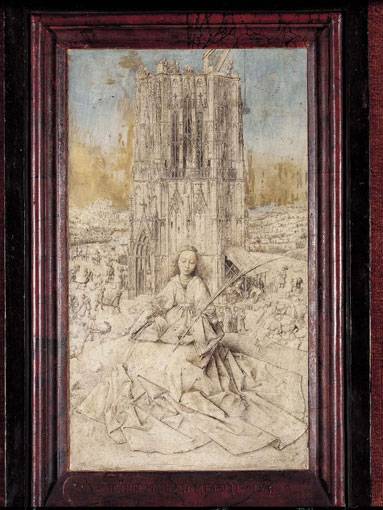 In Album, Lady Violet Powell shows one of Jan Van Eyck’s versions of Saint Barbara, but we think that our choice by Master FVB better captures the look of sadness and irony.

This evocation of the mysterious ambiguity of Jean’s appearance put us in mind of  this well-known painting by Lucas Cranach the Elder (1472-1553) of Venus with Cupid, from about a half-century later than the Saint Barbara engraving. Here is no virginal saint, but her physical proportions recall her gothic origins and her facial expression goes a long way to help readers imagine what Powell might have had in mind.