Posted on March 8, 2014 by picturesinpowell

We already know Barnby’s opinion of St. John Clark’s taste. Now Mark Members, dismissed as St. John Clarke’s secretary, tells Jenkins, ” I can say without boasting that I had done a great deal to … improve St. J’s attitude towards intellectual matters. Do you know, when I first came to him he thought Matisse was a plage .. [French for ‘beach’]”  [AW 130/123]

We have already touched on Matisse when we considered Mr. Deacon’s view of Post Impressionism and when Jenkins saw a Derain.  Barnby playfully contrasted him with Masaccio.

Matisse preceded Picasso at the forefront of French twentieth century art, gaining prominence in the first decade of the century as the driving force of Fauvism. Powell learned of Matisse’s paintings early in his years at Eton, about 1919 [TKBR 33]. Members is speaking in 1933; by then Matisse was so well known that he had been on the cover of Time Magazine (Oct. 20, 1930) after he had been the United States to sit on the jury of the 29th Carnegie International exhibition.

There are many iconic Matisse images to choose; we picked this version of Bathers, both to recall Clarke’s plage and to reference Matisse’s homage to and evolution from Cézanne. A webpage of The Art Institute of Chicago illustrates how this work was pivotal in Matisse’s development .

Later in the conversation, Members says, “Then one morning at breakfast he says Cézanne was ‘bourgeois.'”[AW 133/126]

Cézanne (1839-1906) was certainly bourgeois in the Marxist sense; his father was a wealthy banker, and Cézanne gained financial independence from his inheritance. Nonetheless, he was an artistic revolutionary, who learned from the more radical of his immediate predecessors. His use of planes of color to create his compositions inspired succeeding developments like Fauvism and Cubism.  Like Matisse, his work was shown in London in 1910  at Roger Fry’s Post Impressionist exhibit. Cézanne painted over 200 pictures of bathers. The work that we show belonged to Matisse, who acknowledge his artistic indebtedness to Cézanne. Matisse donated this canvas to the Petit Palais museum in 1936, making it the first Cézanne Bathers to be displayed in a western museum. 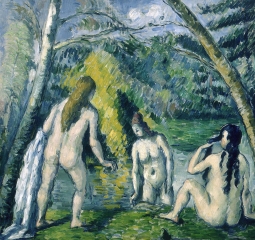