Posted on December 26, 2015 by picturesinpowell

Perhaps illusorily, his body and face had shrunk, physical contraction giving him a more simian look than formerly, though of no ordinary monkey; Brueghel’s Antwerp apes (admired by Pennistone) rather than the Douanier’s homely denizens of Tropiques, which Soper, the Division Catering officer, had resembled. [BDFR 11/7] 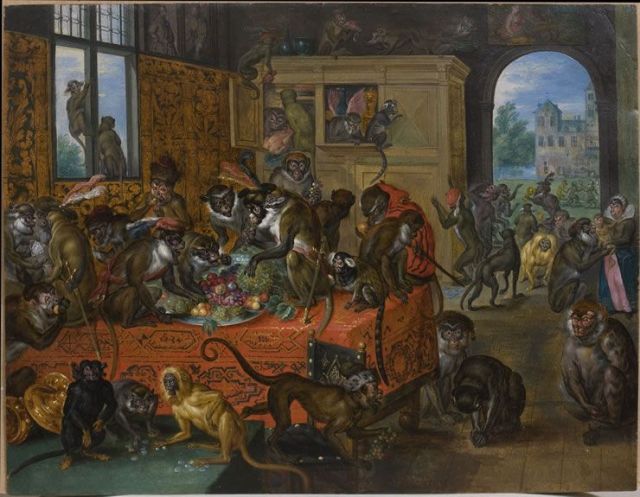 Singerie
Jan Brueghel the Elder, 1620s
oil on copper ,11 x 14 in
Rubenhuis, Antwerp on loan from a private collection

The picture is currently in the Rubens Museum (Rubenshuis) in Antwerp, the city where Peter Paul Rubens and Jan Brueghel lived and collaborated (Woollet and  Suchtellen  Rubens and Brueghel: A Working Friendship). Barely discernible at the upper right, just above the door, is a copy of Rubens and Frans Snyders’  Ceres and Pan (1620), which is currently in the Prado. The contrast between the cultivating goddess Ceres and the passionate god Pan is a comment on the tension between human culture and the wild monkeys; however, we perceive the always wily Sillery as now wizened rather than wild.

The Douanier is the nickname of the French painter Henri Rousseau (1844-1910).  A douanier is a toll or tax collector, which was Rousseau’s occupation from 1871 until about 1893. He started painting seriously about the mid 1880s, in an unschooled manner that seemed primitive to his contemporaries but sophisticated to today’s eyes.  He never left France, observing the foliage for his tropical paintings chiefly in Paris’ botanical garden, the Jardin des Plantes.

Picasso introduced Rousseau to many rising artists of the School of Paris, who were influenced by his distinctive style.  When he died, Appolinaire wrote his epitaph, which was chiseled into the grave stone by Brancusi: “We salute you Gentle Rousseau. You can hear us, Delaunay, his wife, Monsieur Queval, and myself. Let our luggage pass duty free through the gates of heaven. We will bring you brushes, paints, and canvas that you may spend your sacred leisure in the light of truth painting, as you once did, my portrait facing the stars.” 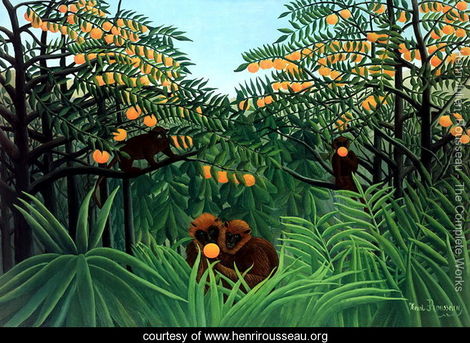 Perhaps Powell saw Tropiques (The Tropics, also known as Apes in the Orange Grove) on a trip to New York. Adelaide Milton de Groot owned it in France and first lent it to the Metropolitan Museum in about 1936.  Incidentally, shortly after BDFR was published (1971), Tropiques made news when the Met sold it back into private hands. Another Rousseau simian scene, Tropical Forest with Monkeys (2010), is owned by the National Gallery, Washington. Rousseau’s monkeys have flat, deadpan, perhaps sad, faces, nothing like the varied distinct personalities shown by Brueghel.