On a tiresome train ride to London, Nick takes up conversation with an un-characteristically cultured fellow officer called David Pennistone, destined to become his long-time friend.

“‘Talking of Vienna,’ he said, ‘did you ever have the extraordinary experience of entering that gallery in the Kusthistorisches Museum with the screen across the end of it? On the other side of the screen, quite unexpectedly, you find these four staggering Bruegels.’

‘The Hunters in the Snow is almost my favorite picture.’

‘I am also very fond of the Two Monkeys in the Kaiser Friedrich in Berlin.  I’ve just been sharing a room with a man in the Essex Regiment who looks exactly like the ape on the left, the same shrewd expression.’”

Pieter Bruegel the Elder (Dutch, 1525-1569) is the beloved, enigmatic painter whose scenes of peasant life are the source of much of what we know about rural mores in the Low Countries of the 16th century.  He studied in Antwerp with Pieter Coecke van Aelst and married his daughter. His sons Pieter the Younger and Jan also became painters; Pieter the Elder was born Brueghel but dropped the ‘h’ from his name; his sons restored it to theirs.  Breugel’s Hunters in the Snow of 1565 is one of five surviving paintings depicting the months of the year and their occupations. 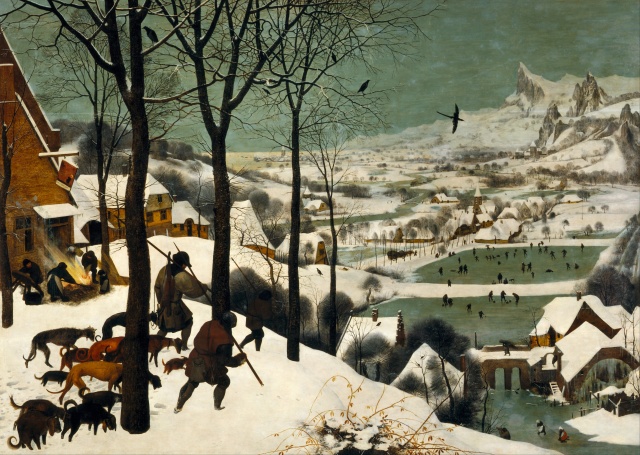 Bruegel’s Two Monkeys of 1562 is of more mysterious, probably allegorical, significance.  It was memorably invoked by the Polish poet Wislawa Szymborska (1923-2012) in her poem entitled “Two Monkeys by Brueghel” (translated here by Magnus Krynski): 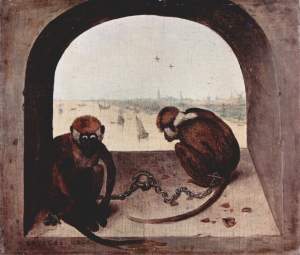 I keep dreaming of my graduation exam:

beyond the window floats the sky,

and the sea splashes.

I am taking an exam on the history of mankind:

I stammer and flounder.

One monkey, eyes fixed upon me, listens ironically,

the other seems to be dozing–

and when silence follows a question,

with a soft jingling of the chain.

Hunters in the Snow remains at the Kunsthistorisches Museum in Vienna.  The Kaiser Friedrich Museum was renamed the Bode Museum after the War, and Two Chained Monkeys has been moved to the Gemäldegalerie, another branch of the Berlin State Museums (Staatliche Museen zu Berlin).