Posted on September 25, 2016 by picturesinpowell

Tokenhouse shows Jenkins three of his canvases, a series on “Four Priests Rigging a Miracle.”  Jenkins saw the paintings as a “sort of neo-primitivism” and  “felt compelled to make a pronouncement, however insipid.

“The garage scene has considerable force. Its colour emotive too, limiting yourself in that way to an almost regular monotone, picked out with passages of flat heavy black.”

“The browns, greys, and blacks seem to create an effective recession.” [TK 128/ ]

Recession is the illusion of three dimensionality created by the painter. Tokenhouse objected to Jenkins’ analysis: “I am no longer interested in such purely technical achievements as correct recession …”  His goal was the political message of the painting, recalling a quote: “A painting is an act of Socialism.”

Primitivism is sometimes used to refer to art that references non-European indigenous artists, like those of Africa, Oceania, or Australia. This type of primitivism grew from the late nineteenth century; a prime example is the work of Paul Gauguin. Primitivism can also refer to “outsider” art, done by those who are self taught or who do not use traditional techniques, exemplified by the work of The Douanier, Henri Rousseau. 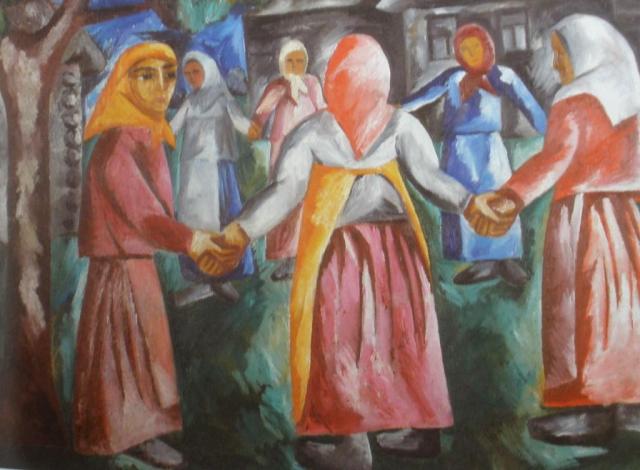 Khorovod
Natalia Goncharova, 2010
Oil on canvas. 40 × 5 in
Serpukhov Museum of Art and History
photo in public domain from Wikimedia Commons

Tokenhouse’s neo-primitivism (no caps) does not identify him with a specific art movement but indicates his desire to be his own kind of outsider.  Nick’s description of Tokenhouse’s painting as an example of “neo-primitivism” is apparently the least damning epithet he can come up with in the face of its muddy-colored incompetence.  Naturally, we have not been able to find the image of a celebrated neo-primitive painting that would do justice to the source of Nick’s dismay in this droll scene, so once again Powell has left plenty of room for our imaginations