Posted on December 26, 2015 by picturesinpowell

We have already noted Jenkins’ interest in public monuments like those in St. Paul’s and the tension between his devotion to Modernism and his nostalgia for the unapologetic patriotism of earlier generations.  Now we will turn to more personal memorials. Within a few months, Jenkins attended the funerals first for George Tolland and later for Erridge at the family church, where the family’s memorials went back to the mid eighteenth century, starting with “a tomb in white marble, ornate but elegant, surrounded by sepulchral urns and trophies of arms” for the 1st Earl of Warminster and including a “portrait medallion, like gray marble against an alabaster background, of the so-called ‘chemist-Earl,’ depicted in bas relief with side whiskers and a high collar…” [BDFR 48-49/42-43]. 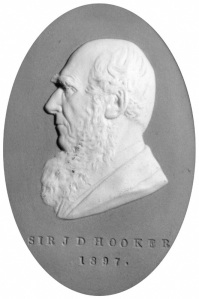 These monuments are, of course, fictictious. We show, at right, a Victorian portrait medallion memorializing another scientist, the botantist Sir Joseph Dalton Hooker. The medallion that we show is Wedgewood and served as the model for a marble medallion of Hooker in Westminster Abbey.

In TKBR Powell gives a more detailed example of the cultural and historical significance of the memorials in a local church and reveals that he, like Jenkins, sees these monuments as both a manifestation of the evolution of modern visual art and an evocative expression of strong emotions. Powell recounts that a family, the Horners, had been resident for years in a Manor House at Mells, England, near Powell’s country house, and buried their dead at St. Andrew’s Church in Mells [TKBR 342-344]. 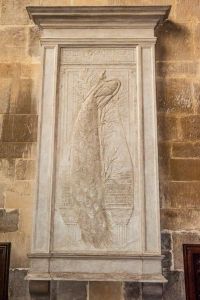 In the first three centuries, they built few monuments in the church; however, between the late nineteenth century and the aftermath of the first war, they built three memorials in which Powell saw a “haunting sense of their time;”  he sees an 1886 mural tablet to Laura Lyttelton, by Edward Burne-Jones, as an example of the way that late nineteenth century work was “heralding the explosion” of Modernism and contrasts the Lyttelton memorial with the more traditional memorial to Edward Horner and the simpler memorial to Raymond Asquith, who both lost their lives in the First World War, as examples of changing styles of artistic patriotic expression. The Asquith memorial has been despoiled by looters, so we cannot show what moved Powell:

“Something about the whole conception of the memorial — which would have been different a few years earlier or a few years later, one could almost say a few months in each case — bring back with a force comparable to no other monument I can thing of an overwhelming sense of the first war, its idealisms, its agonies, its tragedies. [TKBR 344] “

After George died, Erridge took up George’s project of commissioning a memorial stained glass window to their grandfather [BDFR  95/89].  Perhaps the Tolland brothers envisioned a window like that shown behind the Horner equestrian statue. That window was designed  by William Nicholson (1872-1949) as part of the Horner memorial