Posted on September 27, 2015 by picturesinpowell

You put them through their literary paces as a matter of routine? …

Pennistone laughed at the thought. Though absolutely dedicated to his duties with the Poles, he also liked getting as much amusement out the job as possible.

‘In the course of discussing English sporting prints with Bobrowski,’ he said, ‘a subject he’s rather keen on. It turns out the Empire style in Poland is known as “Duchy of Warsaw”. That’s nice, isn’t it?’  [MP 37/33] 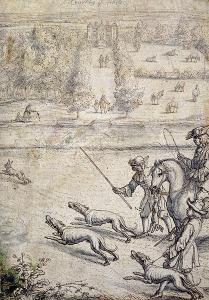 We have already shown some sporting prints while discussing the decor of Stringham’s rooms.  The heyday of the British sporting prints, mid seventeenth to mid nineteenth century was during the glory days of the British Empire (Snelgrove British Sporting and Animal Prints, 1658-1874 ).  The prints were widely circulated and hung in both aristocratic and middle class homes all over England. Francis Barlow (1626-1704 ) is often credited with being a founder of the style, adopting the etching techniques of the Dutch masters to popularize English country scenes. The British love of sport and of sporting prints survives the shrinkage of the Empire, but the production of sporting prints waned with popularization of photography.

The Duchy of Warsaw was created by Napoleon in 1807 as a Polish state and destroyed in 1815 by the Congress of Vienna, which divided it between Russia and Prussia. As far as we can tell, the art associated with the Duchy was much more likely to be military than sporting; see for example, Juliusz Kossak’s portrait of Prince Józef Poniatowski, Commander in Chief of the army of the Duchy.