Gericault’s Raft of the Medusa

Posted on August 15, 2015 by picturesinpowell

Géricault’s  Raft of the Medusa

Nick enjoys lunching with the Free French at their headquarters in London.  “Their headquarter mess in Pimlico was decorated with an enormous fresco, the subject of which I always forgot to enquire. Perhaps it was a Free French version of Géricault’s Raft of the Medusa, brought up to date and depicting themselves as survivors from the wreck of German invasion.” [MP 145/140]

Théodore Géricault (1791-1825) was a French painter whose heroic depictions of military and equine subjects form a bridge between the neoclassical and romantic styles.  Illness ended his life prematurely, and while his works suggest the beginnings of a brilliant career, his enduring fame is almost entirely attributable to his 1819 masterpiece, The Raft of the Medusa. 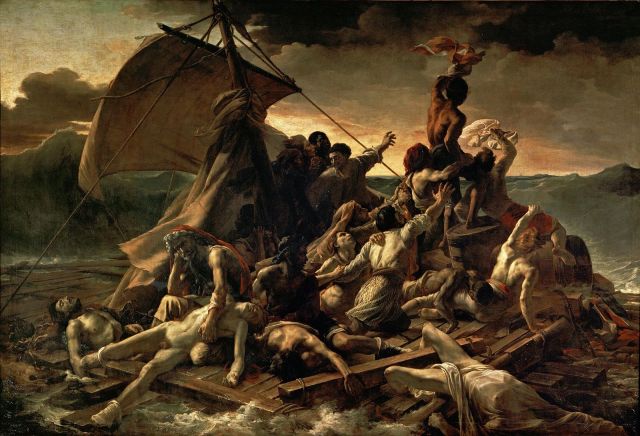 The nominal subject of Géricault’s masterpiece is the 1816 shipwreck of the naval frigate Meduse off the coast of Africa.  Its visual content, however, is the agony of passengers and crew members stranded on a flimsy raft of timbers lashed together, surrounded by treacherous waves and voracious sharks.  In fact, only 15 of the 147 who actually fled the sinking Meduse on just such a raft survived to tell its story, which included starvation and a resort to cannibalism.  The actual event was an international scandal due to the incompetence and self-serving actions of the ship’s captain, allegedly acting under the instructions of his employers. Géricault’s huge, riveting painting secured its creator’s reputation and a permanent place of prominence in the Louvre shortly after the painter’s death.

4 Carlton Gardens, in St. James, was the actual headquarters of the Free French for four years during the War. It is now a private residence, and we have been unable to look inside to see if any fresco was part of the décor.  In any case, if Nick’s surmise is correct, that the the fresco in the Free French mess is indeed based on The Raft of the Medusa, its implication is that the collaborators in the Vichy government have abandoned the French people to the Germans in order to save themselves.

1 Response to Gericault’s Raft of the Medusa