In At Lady Molly’s Nick was introduced by Chips Lovell to the the bohemian home of Molly and Ted Jeavons.  There, amid priceless art works by Wilson and Greuze hung pastels by an unknown artist of Moroccan subjects.  Now, during the chaos of the blitz, Nick has returned to the nearly-ruined Jeavons home, where Lady Molly has perished and all that remains of the art works are those Moroccan pastels. “The pastels, by some unknown hand, of Moroccan types remained. They were hanging at all angles, the glass splintered of one bearing the caption Rainy Day at Marrakesh.” [SA 164]

In our QA post Wilson and Greuze at the Jeavons’s we offered a pastel of a domestic scene in Marrakesh by Zinaida Serebriakova, from 1928, as a likely example of what the Jeavons’s might have collected.  Continued searching strengthens our hunch that Serebriakova’s work might indeed have turned up in the heterogeneous Jeavons collection.   Zinaida Serebriakova (Russian, 1884-1967) is celebrated as one of the first female painters of the early Modernist period, though her most famous works retain a classical rather than revolutionary nature.  Serebriakova made many pictures of her travels in Morocco, though none, alas, are captioned Rainy Day at Marrakesh.  Indeed, Marrakesh’s scant annual rainfall insures that few rainy views are likely to turn up in any artist’s oeuvre, but a watercolor of Marrakesh by Serebriakova suggests at least a touch of rain might be predicted, judging from that sky. 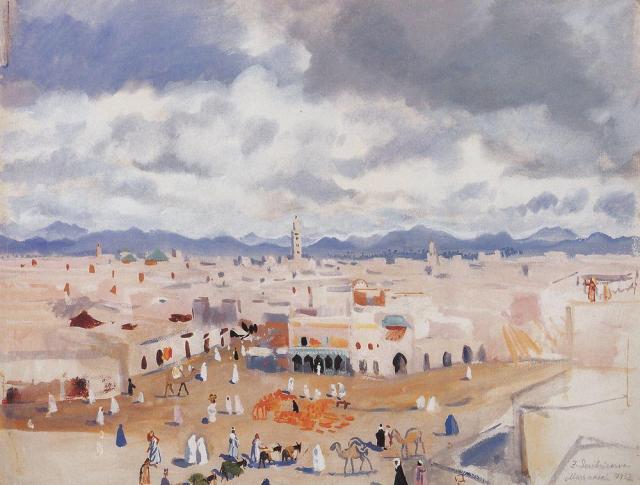 The storage of the Wilson and Greuze in a safe location before the bombing is an example of a more general preservation of art in British collections by removal early in the War from London to protected sites in the country side.