The Embarkation of the Queen of Sheba
Claude Lorraine
The National Gallery, London
wikimedia commons

Jenkins goes with his friend Peter Templer to visit the Templer home, set on a cliff above the sea. Jenkins first sees the enormous villa with a backdrop of clouds and olive green waves as “a sea-palace for a version of one of those embarkation scenes of Claude Lorraine– the Queen of Sheba, St. Ursula, or perhaps The Enchanted Castle.” [QU 73/74].

Claude Lorraine (c.1604-1682), born Claude Gellée, is often called simply Claude. The Lorraine or Lorrain is added for his native French province. Like his good friend Poussin, he spent most of his artistic career in Rome, where he became a master of the ideal landscape.  By the eighteenth century, many of his works had been imported to Britain, souvenirs of aristocrats from their Grand Tours. Lorraine is still in vogue, or at least in vogue again, highlighted with shows at the Ashmolean Museum in 2011 and the National Gallery in 2012. Reviewers have been enthusiasts: “The 17th-century landscape artist, Claude Lorrain, painted trees as other artists might paint mistresses.” (Alastair Sooke, The Telegraph, October 18,2011)  “Turner worshipped him, Gainsborough argued that there was no need to paint real landscapes when you had him as an inspiration, and Constable declared him quite simply ‘the most perfect landscape painter the world has ever seen'”. (Adrian Hamilton, The Independent, October 24,2011). For a thorough view of his oeuvre visit Claude Lorraine — The Complete Works. 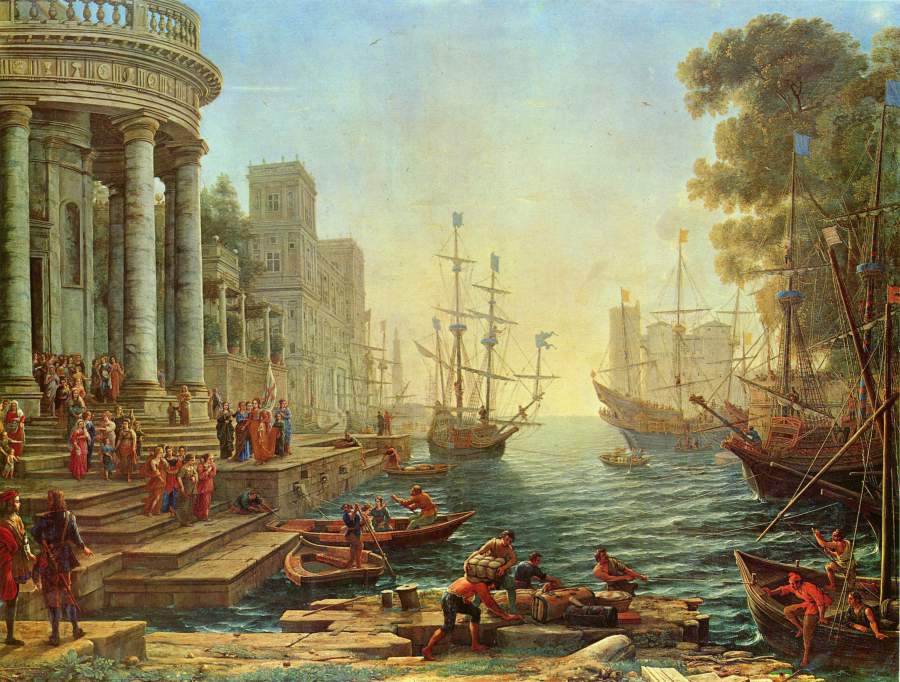 Seaport with the Embarkation of St. Ursula
The National Gallery
wikipaintings.org

Claude painted many Embarkation and Disembarkation seascapes. Seaport with the Embarkation of the Queen of Sheba (1648) and Port Scene with Embarkation of St. Ursula (1641) share dramatically lit sky and waves with classical waterside mansions, probably not quite like the Templer house, built of brick in the late nineteenth century and set back from the water in a forested park.

When he adds The Enchanted Castle to the list, the narrator progresses from Jenkins hyperbolic impressions of Templer’s home to foreshadowing Jenkins’ enchantment by Templer’s sister, Jean.  Perhaps the power of the landscape adds to her bewitching powers. The  National Gallery bought The Enchanted Castle  in 1981,  but Lord Wantage owned the canvas in the nineteenth century, when it was one of the best known and widely reproduced paintings in Britain, in part because of the homage Keats paid it in “Ode to a Nightingale.”

Another reviewer of the 2011 Ashmolean exhibit considered “The Enchanted Castle” the highlight of the show (Robin Lane Fox, The Financial Times, October 18, 2011) He recalled that when he was at Eton, the painting had belonged to his family for over a century; while home from school on holiday, he would gaze at the figure in the foreground, looking for strength to survive his return to school.

The reviewer Fox, in his schoolboy days, saw the figure as another young boy pondering the power of an institution. However, the figure is actually the beautiful young girl Psyche; only in retrospect could the narrator Jenkins know how Psyche’s tumultuous relationship with Cupid might have warned him about the girl he is soon to meet.