“a portrait of himself hanging on the wall above him –the only picture in the room– representing its subject in a blue suit and hard white collar. The canvas, from the hand of  Isbister,  the R.A., had been tackled in a style of decidedly painful realism, the aggressive nature of the pigment intensified by the fact that each feature had been made a little larger than life. [QU 76/76]” 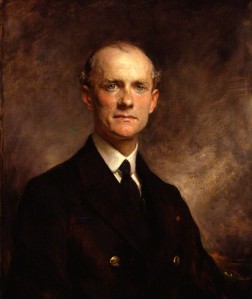 When we first saw the name Isbister, Powell’s first fictional artist, it stirred memories of Elstir, Proust’s paradigm artist among his contemporaries, yet there is no evidence that Powell had Elstir in mind. Others have also speculated about the name: that it derives from a location on Shetland or Orkney; that it memorializes the first British victim of a bomb in World War I; that it recalls another artist Isbister in a story by HG Wells. When asked about this name game during an interview for the Paris Review, Powell just laughed.

Isbister is an olio of artists, but we are not sure of which. One clue is the R.A. that closely accompanies his name. The Royal Academy of Arts in London is an independent group of artists and architects, founded in 1768 by George III, with a self perpetuating membership, currently numbering 80.

The Royal Academy of Arts Collections website lists all current and former members. We have reviewed RA painters born before 1900 and elected to the Royal Academy by 1920 looking for possible models of Isbister. The Royal Academy at that time was known for its inclusion of conservative academicians, occasionally even hacks , but never, by any means, untalented amateurs. However, in the twenty-first century Royal Academy exhibitions are hardly drab or old fashioned.

We suggest that the portrait of Alfred Carpenter by Sir Arthur Stockdale Cope shares characteristics with Isbister’s portrait of Templer. Cope,  like Isbister, was an extremely successful portrait painter. He started exhibiting at the Royal Academy and the Royal Society of Portrait Painters by age 19 and by 1935 had shown 288 works at these institutions. He painted Kings Edward VII, George V, and Edward VIII and many of the rich and aristocratic.

Some of the issues related to portraiture and the advent of Modernism are explored by Eric Kandel in The Age of Insight.  Kandel claims that the primate brain prefers facial images when the features are exaggerated, even when carried to the point of caricature.  Isbister painted Templer’s feature “a little larger than life. ” Some of his contemporaries, like the Austrian Expressionist Oscar Kokoschka, used this attenuation of physical characteristics to give their portraits strong psychological power, but the price of this power could be the displeasure of the sitter. The famous neuroanatomist Auguste Henri Forel refused to buy this portrait that Kokoschka painted of him in 1910. Society painters like Isbister may maintain their popularity by using only just enough emphasis and exaggeration to please their clients.

The introduction of the work of the immensely successful Horace Isbister, R.A. described by Nick with undisguised derision, is the first sighting of a recurrent theme in Dance, the way in which the advent of Modernism in the arts forced the reappraisal of practitioners past and present.  Isbister is one of many characters (e.g., Deacon, Barnby, Tokenhouse, St-Jean Clark, X. Trapnel, Moreland, etc.) whom Powell challenges the reader to locate in the categories of master, amateur, charlatan, or genius–recognized or unappreciated.