Posted on January 6, 2015 by picturesinpowell

When Nick returns to Stourwater with Templer, the “exuberant” jumble of the decorations impresses him more favorably than it had on his earlier visit with the Walpole-Wilsons.  “Between bookshelves” in a paneled gallery “hung drawings: Conder, Steer, John, a couple of Sickerts. Barnby’s nude of Norma, the waitress from Casanova’s Chinese Restaurant, was beside the fireplace, above which stood a florid china statuette of Cupid Chastised” [TKO 112/109]

Here Powell pays homage to some  early twentieth century British artists of personal importance to him.

Charles Conder (1868-1909) was an English-born Australian painter and printmaker associated with a late-19th century Australian art movement known as the Heidelberg School.  Conder was also a contributor to The Yellow Book, the provocative English art and literary quarterly of the 1890’s that featured many of the top artists of the day.  Since Nick mentions that Morland and Barnby had a hand in freshening  up Sir Magnus’s medieval taste, perhaps they would have favored The Yellow Book’s contemporary aesthetic.  Accordingly, we have chosen to show Souvenir de Paris, one of Charles Conder’s illustrations for that periodical,  as a Conder drawing that might have hung at Stourwater. Conder died when Powell was quite young, but Powell was still a teen when he browsed Conder’s illustrations in his father’s copy of Balzac’s La Fille aux Yeux d’Or.  [TKBR 117] We also show a drawing by Conder’s fellow Yellow Book contributor, Philllip Wilson Steer (1860-1942).  Steer trained at the Ecole des Beaux Arts in Paris and made his reputation in Britain as an Impressionist painter of the English landscape. 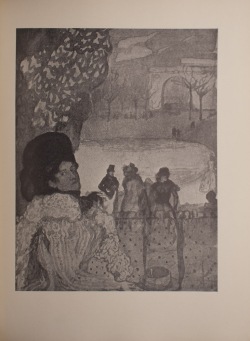 Nude Sketch
Augustus John, 1909
The Slade; a collection of drawings and some pictures done by past and present students of the London Slade School of Art
photo public domain from Wikimedia Commons

The John drawing Nick sees in the paneled gallery is presumably by Augustus John, the flamboyant and immensely talented Welsh-born portraitist . [We have previously shown a portrait of John by Powell’s friend Adrian Daintrey, the reputed model for Barnby.]  John was another good friend of Powell’s and drew portraits of him [TKBR 138-9]. Augustus’ sister, Gwen John, was also a distinguished portraitist, though with a less showy manner as a painter and a less sensational personal life.  Eventually, Gwen’s artistic reputation came to eclipse that of her brother Augustus, whose early brilliance seemed to wane as he aged.  But at the time of Nick’s visit to Stourwater, Augustus was at the peak of his career and was painting portraits of many of the luminaries of his day, including W.B. Yeats, T.E. Lawrence, and later on, Dylan Thomas. This nude figure drawing by Augustus might have appealed to Sir Magus Donners’ tastes.

Walter Richard Sickert (1860-1942) was, like Augustus John, a member of the Camden Town Group, a London cohort of early modernists known more for their bohemian-neighborhood lifestyle than for a unifying stylistic trait.  Sickert was a German-born disciple first of Whistler, then of Degas.  He is often called an Impressionist, less for his plein-air effects than for his interest in social-realist subjects, which he drew from life or photographs and then painted from his drawings.  Pictured here is one of Sickert’s many drawings for his famous painted subject, L’Ennui.

Powell recalled that while he was an undergraduate at Oxford in the mid 1920s, he heard Sickert give a Slade lecture : “Tall, gray-haired, crimson in face, wearing a thick greenish loudly-checked suit, he chatted in a conversational voice, humorous and resonant, while he flourish a cigar…. delivering his direct no-nonsense art criticism…” [TKBR 80]

Lord Beaverbrook is thought to have been a model for Sir Magnus Donner.  Presumably Stourwater shared some characteristics with Beaverbrook’s estate Cherkley Court. Sickert became friendly with Lord Beaverbrook, who reportedly had the largest collection of Sickert’s works, some of which are now displayed at the Beaverbrook Art Gallery in Beaverbrook’s native New Brunswick. Sickert’s portrait of Beaverbrook is in the National Portrait Gallery. During World War I, Beaverbrook recruited Steer to paint pictures of the Royal Navy. Beaverbrook also commisioned Augustus John to paint a large historical mural about World War I for the a war memorial art gallery in Ottawa. The gallery and the mural were never completed, but the unfinished mural is now displayed at the Canadian War Museum.

We cannot leave the room without providing a facsimile of Cupid Chatised.