Posted on December 12, 2016 by picturesinpowell

Matilda kept a drawing of Sir Magnus Donners by Wyndham Lewis “resurrected in her sitting-room.” [HSH 49/50]

We already know that Sir Magnus collected works by British artists who were his contemporaries, like Sickert, Condor, John, and Steer. Percy Wyndham Lewis (1881-1957) was born in Canada but spent much of his artistic life in Britain. Like Sickert and John, he was an early member of the Camden Town Group (1911). Powell and Lewis had friends in common, like Constant Lambert, and Powell particularly admired some of Lewis’ novels, such as Tara (1918); however, they did not meet until the early 1950s. Powell described Lewis from that meeting:

“Big, toothy, awkward in manner, Lewis behaved with an uneasy mixture of nervousness and hauteur. In his white shirt and dark suit he looked like a caricature of an American senator or businessman,…” [TKBR 198]

Lewis founded a style of geometrical abstraction, dubbed Vorticism, a descendant of Cubism and of Futurism, exemplified by Workshop (shown left.) After the First War, his work became more representational, and his portraiture, especially after 1930, gained renown.  In 1932, Sickert called him “the greatest portraitist of this or any other time.” This view, however, was hardly universal. In 1938, the Royal Academy, still in the thrall of the likes of Isbister, rejected Lewis’ portrait of T.S. Eliot for an exhibition; Augustus John resigned from the R.A. in protest.

Recalling the similarities between Sir Magnus and Lord Beaverbrook, we have looked for a Lewis portrait of Beaverbrook and not found one; Beaverbook was, however, influential in Lewis’ appointment as a Canadian war artist, Lewis’ work hangs in the Beaverbrook Art Gallery. 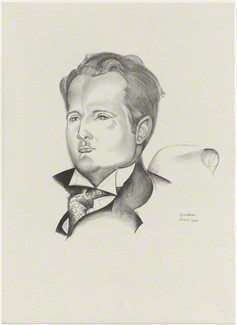 Matilda owned a drawing rather than a painting, so perhaps a better approximation of her the portrait of Sir Magnus would  be Lewis’ drawing of James Joyce. We also show a lithograph by Lewis of Constant Lambert to emphasize the relationships linking Powell and Lewis.

Quote | This entry was posted in Uncategorized. Bookmark the permalink.