We have been avoiding writing about Barnby’s frescoes for the Donners Brebner building because we know so little about them. They were commissioned by Sir Magnus Donners, completed about 1928, and received “a great deal of public attention.” [AW 31/24, CCR 14/9] Now that we are reminded that they were destroyed by a direct hit on building in the Blitz, we will provide some historical and geographical background that helps us better imagine Powell’s creations [SA 8/5. MP 118 /113].

Jenkins described the Donners Brebner building, on the south shore of the Thames across from Millbank, as “dominating the far shore like a vast penitentiary” [CCR 120/115] and “this huge shapeless edifice, recently built in a style as wholly without ostensible order as if it were some vast prehistoric cromlech.” [QU 218/225]

Millbank runs along the Thames south of Westminster to Vauxhall bridge; the Albert Embankment runs along the opposite side of the river. Both Millbank and the Albert Embankment sustained multiple bomb hits during the Blitz. After reading about Blitz damage in this part of London, we have reached a dead end in our search for Barnby’s frescoes. For example, the Tate Museum, now called the Tate Britain, was built in Millbank near the Vauxhall bridge late in the nineteenth century on the sight of an infamous penitentiary. The Tate sustained a direct hit, and damage to the building is still visible, yet no art was damaged.

Another approach is through Lord Beaverbrook, who shared some characteristics with Magnus Donners. Lord Beaverbrook was an art collector and did commision murals from contemporary British painters. The building that he built in Fleet Street in 1933 for one of his newpapers, The Daily Express,  survived the Blitz and is today regarded by some as an Art Deco masterpiece, but we can see how others might view it as “without ostensible order.” 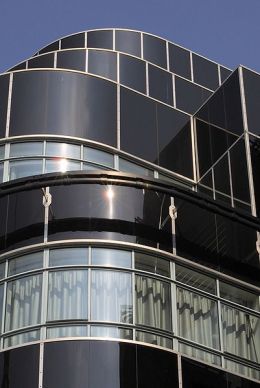 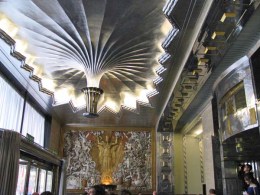 The lobby of the former Daily Express Builiding
photo from Manchesterhistory.net

The lobby of the building was designed by Richard Atkinson with bas relief sculptures by Eric Aumonier. Frescoes, by Barnby or others, are absent.

We have no idea if our speculations and digressions have anything to do with Barnby’s frescoes. We welcome insights from our readers.