Posted on April 20, 2015 by picturesinpowell

Jenkins’ Uncle Giles died while living at the Bellevue, run by Albert Creech, whom Nick remembered from his boyhood at Stonehurst. In Nick’s memory, Albert had mythical status like “Mr. Deacon’s paintings of the Hellenic scene. Albert, I thought was like Sisyphus or Charon, one of those beings committed eternally to undesired and burdensome labours. Charon was more appropriate, since Albert had, as it were, recently ferried Uncle Giles over the Styx.” [TKO 151/]

Once again Powell teases us to imagine a painting that a fictional artist did not paint. By invoking Mr. Deacon’s style, while he reminisces about Albert, Nick suggests that Albert deserves a big canvas, larger than life. 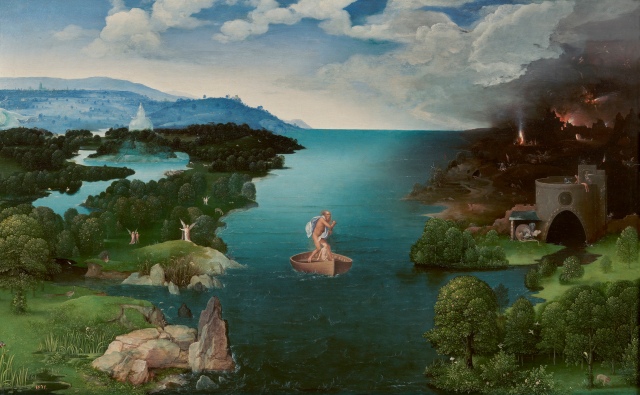 Charon, in Greek mythology, was the ferryman who took the dead across the river Styx to Hades.  The painting of him that topped our Google search was the one above by Joachim Patinir. The Charon shown here is the focus of the picture but does not seem to have the heft that Nick is imagining. 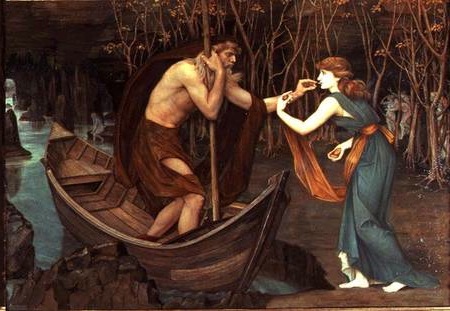 Charon and Psyche
John Roddam Spencer Stanhope, 1883
oil on canvas, 38 x 55 in
private collection
photo from preraphaelitepaintings.blogspot.com
(There is controvery about whether the photo is flipped horizontally.)

Mr. Deacon, with his sympathy for the Pre-Raphaelites, might have emulated the work of John Roddam Spencer Stanhope (1829-1908), who was associated with Edward Burne-Jones and George Frederic Watts. In the painting, Charon is taking an obol, the traditional coin fare for his services, from Psyche’s mouth; we are sure that Mr. Deacon’s painting of Charon would not have included a female form. 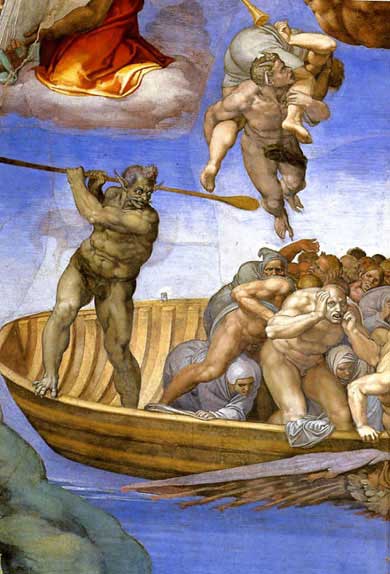 Charon, ferrying the Damned into Hell
Michaelangelo (1536-1541)
detail from The Last Judgement (48 x 44 ft) , south wall of the Sistine Chapel
photo from italian-renaissance-art.com

One of our favorite Charons was painted by Michaelangelo for the Sistine Chapel. Michaelanglo’s conception of Charon was probably influenced by Dante’s description of the ferryman whom he meets in Canto III of the Inferno (verse translation copyright 1980 by Allen Mandelbaum) :

by signaling to them, has all embark;

his oar strikes anyone who stretches out.

Michaelangelo’s Charon has mythic proportions, but his demonic qualities do not suit Albert.  We think Nick was imagining a gentler ferryman.