Tokenhouse IV : At the Venice Biennale — The Soviet Pavillion

Posted on September 25, 2016 by picturesinpowell

At the Venice Biennale with Jenkins, Tokenhouse says:

“I guarantee that the only sanctuary from subjectless bric-à-brac here will be in the national pavilions of what you no doubt term the Iron Curtain countries. We will visit the USSR first.”

The white pinnacled kiosk-like architecture of a small building, no doubt dating from pre-Revolutionary times, seemed by its outward church-like style to renew the ecclesiological atmosphere that pursued Tokenhouse throughout life. Within, total embargo on aesthetic abstraction proved his forecast correct. We loitered for a while over Black Sea mutineers and tractor-driving peasants….. [TK 134/127]

The artists are not limited to painters. For example, Kukryniksy was a collective of poster artists; a collection of their anti-Nazi posters has been exhibited at the Art Institute of Chicago. Nikolai Tomsky did monumental sculpture of Soviet heroes. 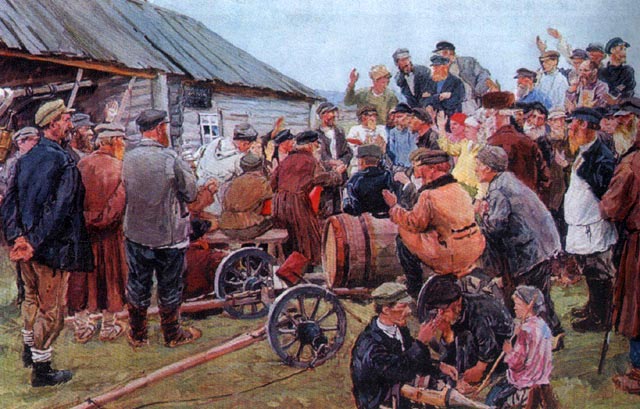 Elections of the Committee of Poor Peasants
Arkady Plastov, 1940
photo listed as public domain in Wikimedia Commons, but copyright status unclear since Plastov died in 1972

Arkady Alexandrovich Plastov (1893-1972) was known for his paintings of the peasants from the village of Prislonikha where he was born. His painting of tractor drivers (see Supper of the Tractor Drivers) was made into a Soviet postage stamp, but we have chosen to show the painting above because the woman with the red kerchief reminds one of Gypsy Jones, who appeared at Erridge’s funeral with “her hair tied up in a red hankerchief, somehow calling to mind Soviet posters celebrating the Five Year Plan.” [BDFR  /45] Other women with red kerchiefs are common in Plastov’s work.  Plastov was awarded two Orders of Lenin, the Stalin Prize, and the Lenin Prize for his painting.

Tokenhouse, despite his politics, could not completely escape his intellectual bourgeois roots: “Never able wholly to control a taste for antagonism, even against his own recently voiced opinions, Tokenhouse shook his head more than once over these images of a way of life he approved, here found wanting in executive ability.” [TK 134/127]