The Drunkenness of Lot

Posted on August 14, 2016 by picturesinpowell

These tapestries must be Florentine — look, The Drunkenness of Lot. The daughter on the left greatly resembles a pupil of mine, but we must not tarry, or the mob will be upon us again. [TK 82/76]

We have not been able to find an image of this particular tapestry; it could well be another invention by Powell, but we will comment briefly on the medium and the message.

The Gathering of Manna
Medici workshop under the direction of Guasparri di Bartolomeo Papini, 1595-1596
Wool and silk, 176 x 168 inches
The Metropolitan Museum of Art, New York

In 1545 Cosimo I de’ Medici started tapestry workshops in Florence, using designs by Italian artists. The Medici workshops continued into the seventeenth century. 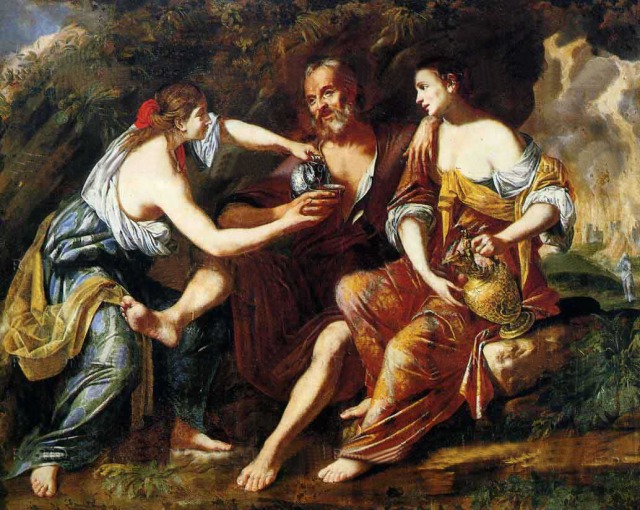 There are numerous paintings on the biblical theme of The Drunkenness of Lot. We show Domenico Maroli’s  Lot and His Daughters not necessarily for its artistic superiority but rather as a painting that might have been available to the Medici workshop. Maroli (1612-1676) was born in Sicily but spent part of his career painting in Venice and other parts of northern Italy.  According to Genesis, Lot’s daughters plied their father with drink and slept with him on successive nights, intending to get pregnant. Some read this as the girls raping their father; for others, it as the daughters’ revenge for prior abuse (Genesis 19:8) The life of Lot, Abraham’s nephew, is rich in moral ambiguity, and the fleeting reference to this tapestry hints at the sexual escapades that follow both in the picture of Candaules and Gyges and in the plot of Dance.

Powell was interested in the issue of sexual censorship. He attended and reported on the trial at the Old Bailey in 1960 that acquitted Penguin Books of obscenity for publishing Lady Chatterley’s Lover. In an interview, he was asked whether relaxation of the censorship laws made it easier to describe the sexuality of Pamela Fitton in the later volumes of Dance. Powell replied by citing Philip Larkin’s poem Annus Mirabilis:

Sexual intercourse began
In nineteen sixty-three
(which was rather late for me) –
Between the end of the Chatterley ban
And the Beatles’ first LP.

We benefit from the end of the ban, as we proceed to see Candaules and Gyges