Posted on August 14, 2016 by picturesinpowell

Referring to art works in the Bragadin Palazzo, Dr. Brightman says. “These Luca Giordano will keep them most of them quiet for the time being.” [TK 80]

Jenkins adds, “Gwinett, preferring to go over the Palazzo at his own speed, strolled away to examine the Roman emperors on their plinths. He may also have had an interest in Luca  Giordano [TK 80/81]

Luca Giordano (1634-1705) was a Neapolitan painter and etcher. Until he was eclipsed by Picasso, he was the most prolific known artist. He spent much of his working life in Naples, Rome, and Florence. For a decade, he was court painter to Charles II in Spain. He was probably in Venice about 1667 but at other times sold his works to Venetian patrons. For example, his Annunciation, now in the Metropolitan Museum in New York, apparently was first displayed in the church  San Daniele in Venice from 1674 to 1809.

We show two of  Giordano’s versions of Venus and Mars because we will soon be discussing a Venus and Mars by Tiepolo.  In Venus, Cupid, and Mars, the earlier version (shown above), the pasty flesh reminds us of heavy, tasteless, braided cookie dough, but Giordano  learned from many of his contemporaries, including Veronese. By the time by painted Venus and Mars Captured by Vulcan, he had adopted a lighter frothy style, so he is sometimes called the “proto-Tiepolo.” 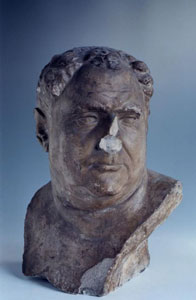 For the Baroque bust of a Roman Emperor we show the “Vitellio Grimani.” When Domenico Grimani gave it to the Venetian Serenissima in 1523, copied from a second century Roman bust, it was considered a portrait of the Emperor Vitellius. Tintoretto studied it in his studio and sketched it. The head has now be re-identified as a court official from Hadrian’s time.