Posted on March 5, 2016 by picturesinpowell

In the House of Commons, Jenkins and Cutts happen upon Widmerpool, who says:

I’m glad to come on you both. First of all, my dear Cutts, I wanted to approach you regarding a little non-party project I have on hand — no, no, not the Roosevelt statue — it is connected with an Eastern European cultural organisation in which I am interested. [BDFR 182-183/171 ] 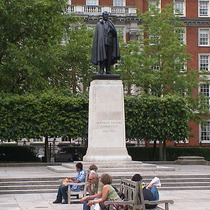 There is more than one memorial to President Franklin Roosevelt ( 1882 -1945) in London, but here Widmerpool is undoubtedly referring to the statue in Grosvenor Square, near the American Embassy, that shows Roosevelt standing with a cane.  The memorial was funded in 1946, just about the time of this encounter with Widmerpool, by public subscription. Over six days, 160,000 memorial booklets were sold at five shillings each. The sculptor was Sir William Reid Dick, whom we have previously mentioned as the designer of a memorial to Kitchener. The architect B.W.L. Gallanaugh redesigned Grosvenor Square for the siting.  The work was dedicated December 4, 1948 by Eleanor Roosevelt and King George VI.