Posted on April 19, 2014 by picturesinpowell

When Jenkins first met Lady Anne Stepney in the late 1920s, Botticelli seemed to be the limit of her knowledge of art. However, by 1933,  Stringham, speaking of his ex-sister-in-law, says: “I heard by the way, that Anne had got a painter of her own by now, so perhaps even Braque and Dufy are things of the past. ” [ AW 208/199]  However, Stringham did not know the latest: Anne had moved on from her affair with Barnby and was now married to Dicky Umfraville.

Boats in Martigues
Raoul Dufy, 1908
27 X 22 in.
Courtauld Institute of Art, London, UK
from Wikipainting.org
This artwork may be protected by copyright. 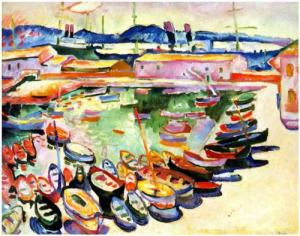 Port of La Ciotat
Georges Braque, 1907 26 x 32 in private collection from Wikipainting.org This artwork may be protected by copyright.

Anne came to Braque and Dufy a bit late. Both were renowned by the first decade of the twentieth century. Braque (1882-1963) exhibited with Fauvists in 1905 and beginning in 1909, worked closely with Picasso, developing Cubism; at times they painted side by side.

Dufy (1877-1953) was also influenced by the Fauvists and later by the Cubists on the way to developing his own richly colored style. Dufy and Braque were friends from their youth in Le Havre, and we have chosen these two examples from their extensive portfolios, because they were done around the time that they were painting together in l’Estaque, in the sixteenth arrondissement of Marseille, a time when their reputations were growing, long before Anne Stepney cared about them.

1 Response to Braque and Dufy