Posted on September 8, 2013 by picturesinpowell 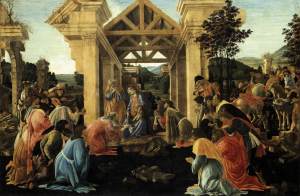 At the dinner party at the Walpole-Wilson’s, Nick first meets Lady Anne Stepney, the unruly younger sister of Peggy Stepney, Stringham’s sometimes-wife. Pressed for conversational gambits, Nick reports “We talked for a time of Botticelli, the only painter in whom she appeared to feel any keen interest . . . . [BM 52/46]”

Sandro Botticelli (1445-1510) was a hugely successful Florentine painter, the student of Fra Fillipo Lippi, but perhaps more widely known by today’s audience than is his teacher. Botticelli’s The Birth of Venus and Primavera are among the most familiar icons in the Western canon of painting, recognizable even to viewers with little knowledge of art history. Somewhat less well-known are the beautiful religious scenes from his later career, represented here by The Adoration of the Magi, now in the National Gallery in Washington D.C.

Botticelli’s fame declined after his death, and he was largely ignored until the Pre-Raphaelites took him up, at the end of the 19th century, as an exemplar of the lyrical realism they championed. By the time of the Walpole-Wilson’s dinner party between the World Wars, Botticelli’s paintings in the Uffizi were once again necessary stops on anyone’s grand tour of Europe. Hence, Lady Anne Stepney’s unwillingness to venture beyond Botticelli in her conversation with an art book publisher speaks less of her connoisseurship than of her truculence as a dinner partner.