Posted on January 5, 2014 by picturesinpowell 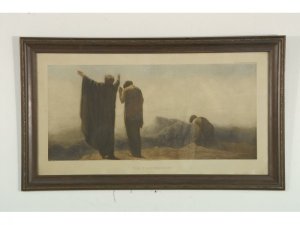 The Omnipresent is the last art work mentioned in BM. The reference is brief:  as he is admitted to the Widmerpools’ apartment for the first time, Jenkins sees Widmerpool sitting reading The Times.  In Jenkins’ first glance around the apartment he “was dimly aware of a picture called The Omnipresent hanging on one of the walls, in which three figures in bluish robes stand or kneel on the edge of a precipice.” [BM 272/261]

The Omnipresent is one of the better known works of the Danish artist Arild Rosenkrantz  (1870-1964).  Jenkins recognizes the work in passing, because Rosenkrantz was well known in London, where he lived from 1898 to 1912 and again after 1925.  Rosenkrantz, who was influenced artistically by the Pre-Raphaelites, William Blake, and JMW Turner, did many public works, including ceiling panels for Claridge’s Hotel and stained glass for St. Paul’s cathedral, and had frequent exhibitions in London galleries.

To grasp the meaning of The Omnipresent it is probably important to know that Rosenkrantz was strongly influenced  philosophically by Rudolf Steiner. Rosenkrantz helped decorate Steiner’s anthroposophical center in Switzerland.  He learned from Steiner that  “colours are the soul of nature and the entire cosmos – and we become part of that soul when we live with the colours” and wrote that Steiner taught “a new  art which springs from Spiritual Science.”

The art hanging in great houses may signify status, wealth, and lineage; a reproduction hanging in a modest apartment reflects personal tastes and interests. Knowing Kenneth Widmerpool’s lack of interest in art, we assume that it was his mother’s decision to display The Omnipresent.  Mrs. Widmerpool had some bookish pretensions, but we have no clue whether her choice of art for her home was aesthetic  or philosophical.

1 Response to The Omnipresent