The Sea Giving Up the Dead That Were In It

Posted on January 4, 2014 by picturesinpowell

Mark Members looked around the room at Mr. Deacon’s birthday party and said: “You must admit it looks rather like that picture in the Tate of the Sea giving up the Dead that were in it.” [BM 253/243] 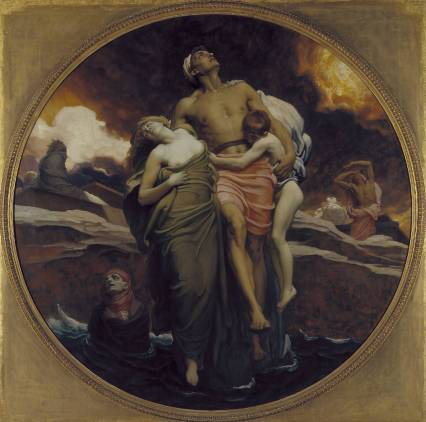 And the Sea Gave Up the Dead Which Were in It
Frederic Lord Leighton, 1892
Oil on canvas, support 90 X 90 inches
Tate Britain

Lord Frederic Leighton (1830-1898) was one of the most famous Victorian painters, president of the royal academy, and the first British artist to have been ennobled. During much of his career, he was strongly influenced  by Greek and Roman mythological themes. He was not particularly sympathetic to his contemporaries, the Impressionists, and modeled his later work on Michelangelo.

Leighton originally designed The Sea Gave Up the Dead as one of eight roundels intended for the dome of St. Paul’s Cathedral; however, the proposed commission was rejected as “unsuitable for a Christian church.” Leighton painted this version for Sir Henry Tate about the time that Tate founded his museum of British art in the 1890’s.

The dramatic scene is based on a passage from the Book of Revelations. Members is brilliant, supercilious, and never quite lives up to his promise; here he uses the painting as a hyperbolic metaphor; by doing so, he says more about his personality than about the party.