Posted on January 4, 2014 by picturesinpowell

Daguerreotypes of Deacon’s mother and of Walt Whitman in oval frames stood on Mr. Deacon’s mantlepiece. The features of his mother “so much resembled her son’s as for the picture, at first sight, almost to create the illusion that he had himself posed, as a jeu d’esprit in crinoline and pork pie hat. Juxtaposition of the portraits was intended, I suppose, to suggest that the American poet, morally and intellectually speaking represented the true source of Mr. Deacon’s otherwise ignored paternal origins. ” [BM 246/236 ]

Daguerreotypes, introduced in 1839, were the first widespread photographic method.  The images  were made directly on a silver plate; there was no photographic negative. Small daguerreotypes, about 2.75 by 3.25 inches, were widely available by the mid 1840s without great expense.  However, the images were heavy and hard to view due to reflections from the silver, and by the early 1860s, daguerreotypes had been superceeded by other processes such as ambrotype and tintype, and sometimes images with these later techniques are mistakenly identified as daguerreotypes. 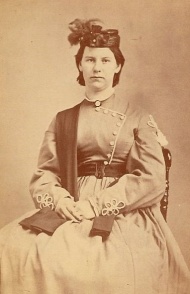 The pork pie hat also dates the photo. The pork pie hat was popular among women in the US and Britain from about the 1830s to mid 1860s; it was small and round with low flat crown and narrow turned up brim.