Posted on August 7, 2013 by picturesinpowell

Le Bas visits Jenkins in his Oxford rooms. “He came farther into the room, but appeared unwilling to seat himself; standing in one of his characteristic poses, holding up both his hands, one a little above the other, like an Egyptian god, or figure from the Bayeux tapestry. (QU 214/221)” 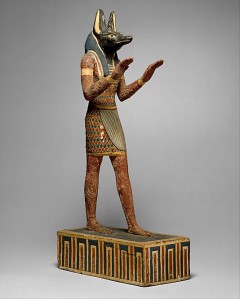 When we read this, we had an immediate image of Le Bas — stiff and angular, yet when we tried to find pictures, whether of an Egyptian god or from the tapestry, with the arms in just this posture, we had trouble finding the exact hand position. Rather, the styles of Pharaonic Egypt or Romanesque Normandy perfectly convey the formal Edwardian Etonian housemaster.

The Bayeux tapestry was commissioned about 1070 by Bishop Odo of Bayeux, Normandy to tell the story of the conquest of England in 1066 by his half-brother, William the Conquerer. Rather than an actual tapestry, it is a  nearly 75-yards-long, 19-inches wide strip of embroidered linen, telling its story in 50 scenes. Powell has said: “It is a work of propaganda, of course, but propaganda that has taken art into close alliance” (SPA… p.171). Some of the cartoonish nature of the tapestry might reflect the constraints of embroidery, but even the painting of the time, now classified as early Romanesque, showed flat fiqures with little perspective. If anything, the size of a figure might represent the importance of the person rather than the position in three dimensions, and there was little attempt at realistic portraiture.

Ancient Egyptian artists painted gods as two dimensional figures using stylized conventions (see The Art of Ancient Egypt, The Metropolitan Museum of Art).  The shoulders are seen from the front; the torso and hips are turned 90 degrees, so that the head, arms, and legs are in profile. The height of a figure might indicate its importantance, and ratios are specified, so that a face would always be 2 palms high, a full body 18 palms high.  The pose of the arms had specific icongraphic meaning, Sculpture added a third dimension but maintained the stiffness and formal iconography.