Posted on March 5, 2016 by picturesinpowell

Jenkins listens to a Venetian singer with Dr. Emily Brightman and reflects:

At the beginning of the century, Marinetti and the Futurists had wanted to make a fresh start — whatever that might mean — advocating, among other projects, filling up the Venetian canals with the rubble of the Venetian palaces. Now, the Futurists, with their sentimentality about the future, primitive machinery, vintage motor-cars, seemed as antiquely picturesque as the Doge in the Bucentaur, wedding his bride the Sea, almost as distant in time; … [TK 8/4] 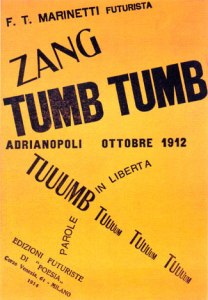 Filippo Tommaso Marinetti (1876-1944) was an Italian poet, editor, and prose author, best known as one of the founders of Futurism.  In 1923, he married the painter Benedetta Cappa. Although he himself was not primarily a visual artist, he wrote poems using “words in freedom (parole in liberta)” to add a second dimension to the power of his work. We have previously quoted the Manifesto of the Futurist Painters. In the passage above, Jenkins is referring to Marinetti’s “Manifesto Against Past-Loving Venice” (1910) in which he advocated “fill(ing) the small, stinking canals with the rubble from the old, collapsing and leprous palaces.”

The bucentaur (bucintoro, after a mythical beast half man and half bull) was the Doge’s galley on which he would sail on Ascension Day, leading a procession of boats to a ceremony in which he would wed Venice to the sea by dropping a ring in the water. The last bucentaur was completed in 1729  and pillaged by the French about 1798. 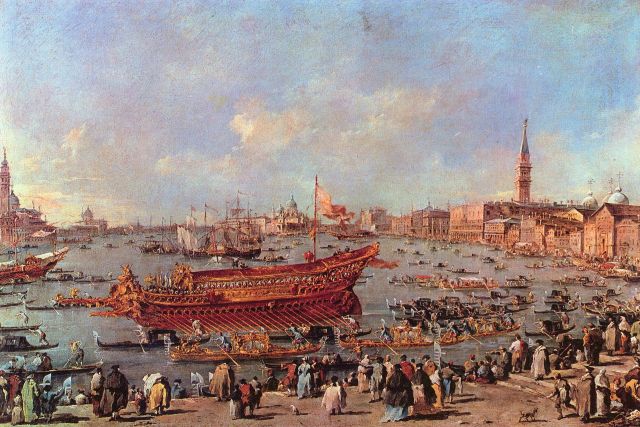 The Departure of the Bucentaur for the Lido on Ascension Day
Francesco Guardi, ~1776-1780
The Louvre
photo in public domain from the Yorck projection via Wikimedia Commons

Francesco Lazzaro Guardi (1712-1793) was a Venetian painter known for his vedute or vistas, large scale cityscapes or seascapes. He created a series of 12 paintings of the bucentaur, ten of which are now in The Louvre.  Guardi rivaled  Canaletto, who also painted the bucentaur, in his portrayals of Venice. Canaletto is known for his accurate, formal and precise depictions of the city. Guardi brought more energy, color, and imagination to his scenes.

Bucentaur’s Return to the Pier by the Palazzo Ducale
Canaletto, 1727-1729
The Pushkin Museum, Moskow
photo in public domain from the Google Art Project via Wikimedia Commons

Of course, Marinetti’s vision of the future has not been fulfilled, and Jenkins could still enjoy the pleasures of Venice. By italicizing the bucentaur, referring us to art works and not just the ship, Powell foreshadows that eighteenth century Venetian painting is an important part of the pleasure of Temporary Kings.