Posted on December 8, 2015 by picturesinpowell

After the war, Nick returns to university to write a book about Robert Burton, but finds the return of his memories of undergraduate years oddly depressing.  “The odd thing was how distant the recent past had also become, the army now as stylized in the mind—to compare another triumphal frieze—as the legionaries of Trajan’s Column, exercising, sacrificing, sweating at their antique fatigues, silent files on eternal parade to soundless military music.” [BDFR 1].

Nick is comparing his memory of military service during the war to war’s representation on Trajan’s Column, erected in AD 113 in the Trajan Forum in Rome. It was built to commemorate and glorify the Emporer Trajan’s two victorious campagns against the Dacians, a people living in what is now Moldova, Romania, and parts of neighboring Ukraine, Bulgaria, Serbia, and Hungary . 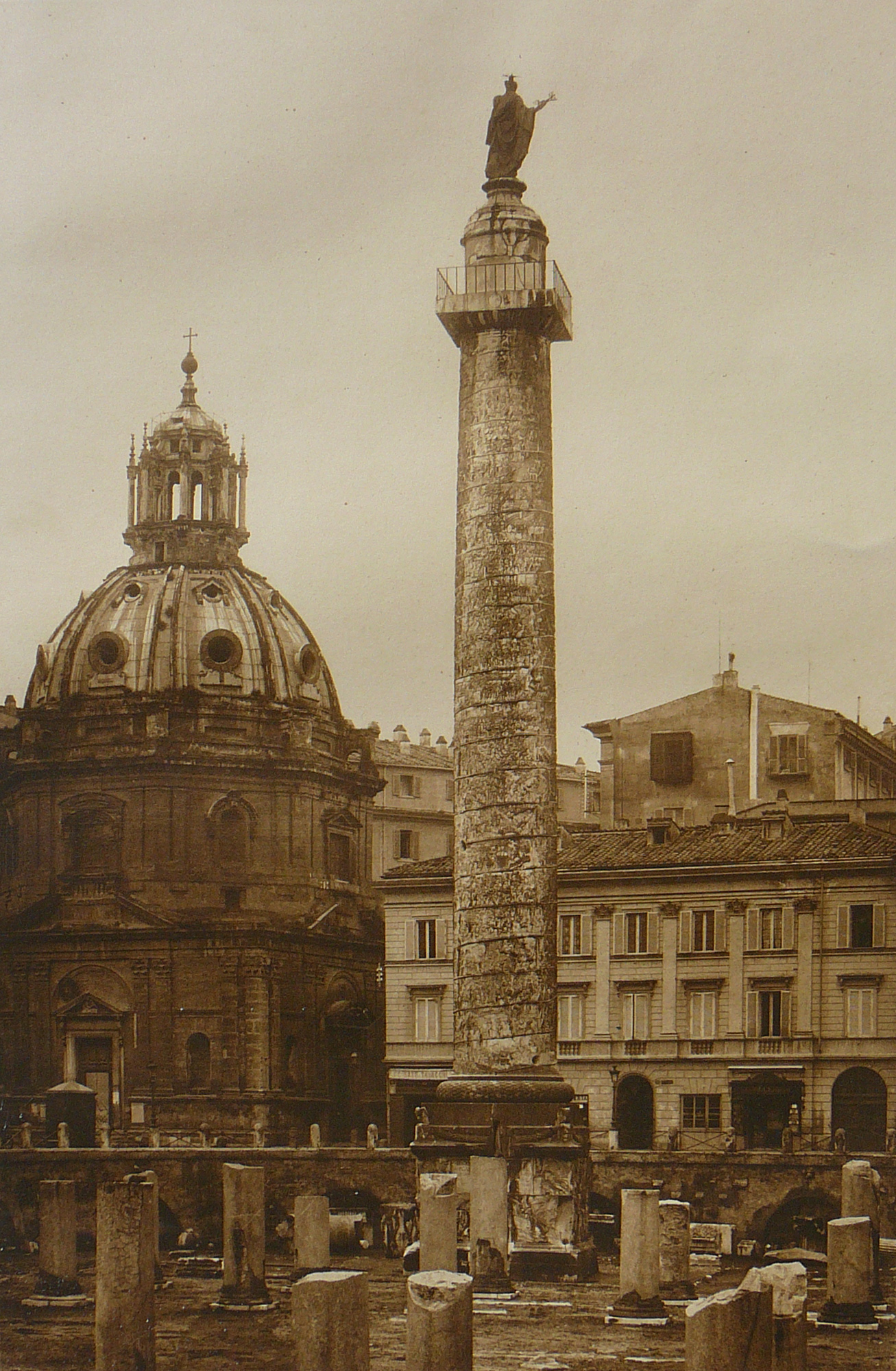 The monument stands 35 meters high, a column of Cararra marble carved in an upward-winding spiral with a continuous, elegant freize depicting episodes from the campaigns in bas relief. The labors of war are depicted in exquisite detail, but the chaos and heartache of war are replaced by stylized order and rhythmic beauty. Originally, a bronze statue of Trajan stood at the top of column; it was replaced in the sixteenth century by a bronze Saint Peter.

Nick has not told us about any travel to Rome. Perhaps, he knew Trajan’s column from the full size plaster cast, made in 1864, that is displayed in London at the Victoria and Albert Museum. Because of effects of time and pollution on the original column, the detail is better studied on the plaster cast reproduction.

The incised script at the base of the column is as stylized as the bas relief army.  This inscription is the preeminent example of the elegant Roman capital alphabet.

In the later twentieth century, this Roman capital script has been adapted into one of the more popular digital fonts, shown at left.

Trajan’s glorification of victory has many descendants: Trajan type face in the titles of epic movies, plaster cast bas reliefs in museums, imitative columns all over the world. Our last post from MP left Nick depressed at the memorial service in Saint Paul’s; at the beginning of BDFR, his post-war depression continues, and he fears that actual painful memories of war will be distorted or obscured in the idealized images of memorial art. We suspect that Nick’s anxiety is that memory itself is the art that necessarily stylizes our most painful experiences into stories that we can bear to tell ourselves.