General Conyers, if painted by Michelangelo

Posted on April 20, 2015 by picturesinpowell

Jenkins visits the aging General Conyers. “His face had become ever more aquiline and ivory, the underlying structure of bone and muscle, accentuated by age, giving him an other-worldliness of expression…. At the same time there was a restless strength, a rhythm, about his movements that made one think of the Michelangelo figures in the Sistine Chapel. The Cumaean Sybil with a neat moustache attached?” [TKO 211/209]

Michelangelo (1475-1564), one of the leading masters of the Italian Renaissance, needs little introduction. Between 1508 and 1512 he painted hundreds of figures on the walls and ceiling of the Sistine Chapel, figures remarkable for their dynamic portrayals of human anatomy. Powell has written that in Britain in the 1920s and 30s, Michelangelo was somewhat out of fashion; his bodies had a “disagreeable sculptural romanticism.” [SPA 177]

The Cumaean Sibyl
Michelangelo 1508-1512
fresco
ceiling of the Sistine Chapel, The Vatican
photo in public domain from Wikimedia.org

The sibyls were soothsayers of Greek and Roman myth. Michelangelo showed 12 portraits of those who had predicted the Coming of Christ, intermingling Old Testament Prophets and the sibyls.  The sibyl at Cumae, a Greek colony near Naples, had rejected advances of Apollo; in response he gave her eternal life but not eternal beauty (Ovid, Metamorphoses XIV:101-153), which explains why her aged face might resemble General Conyers.

After watching General Conyers move, Jenkins refines the metaphor. “All at once he leant forward, turning with one arm over the back of his chair, his head slightly bent, pointing to another picture hanging on the wall. I saw he was an unbeard Jehovah inspiring life into Adam through an extended finger.” [TKO 211/209  ]

The Creation of Adam
Michelangelo, 1511-12
fresco, 189 x 91 in
Ceiling of the Sistine Chapel, The Vatican
photo in public domain for Wikimedia.org 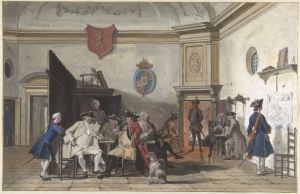 General Conyers was pointing at his picture by Troost or Van Troost, which he had previously discussed with Jenkins in ALM. Now Jenkins sees that the painting is one of Troost’s later works, showing a scene from military life.

We will let Powell end this last post of TKO with the paragraph that he wrote to conclude his autobiography (TKBR 440-441):

“But if the consolation for life is art, what may the artist expect from life? An incident mentioned quite casually in Vasari’s Lives of the Most Excellent Italian Architects, Painters, and Sculptors always seems to me worth recalling. It teaches several lessons: that if you want something done get the best executant available to do it; that minor jobs are often worth taking on; that duration in time should not necessarily be the criterion in producing a work of art. Vasari says that on a winter day in Florence, when snow was deep on the ground, one of the Medici sent Michelangelo to build a snowman in the courtyard of the Medici palace. Notwithstanding those (like Constant Lambert) who dislike the High Renaissance one can scarcely doubt that the finest snowman on record took shape.”

1 Response to General Conyers, if painted by Michelangelo