Posted on December 27, 2014 by picturesinpowell

Moreland is talking to Maclintick, who is drunk and depressed. Maclintick is bemoaning how his wife Audrey treats him; Moreland sees a parallel: “It wasn’t for nothing that Petrach’s Laura was one of the de Sade family.”[CCR 204/212 ]

Petrarch and Laura de Noves
Venetian School, ~1510
oil on canvas 22 x 28 in
photo credit: The Ashmolean Museum of Art and Archaeology
from BBC Your Paintings

Petrarch (1304-1374), the Italian poet, wrote sonnets of unrequited love to Laura. She rejected him, not because she was a distant ancestor of the Marquis de Sade, but because she was married. Not surprisingly, there is no fourteenth century picture of them together and the unknown sixteenth century Venetian artist shows them side by side by juxtaposing existing portraits of the two.

Maclintick recalls a picture of Petrarch and Laura, but Moreland corrects him, reminding him of a picture of Dante and Beatrice.  This painting by the Pre-Raphaelite painter Henry Holliday (1839  – 1927  ) shows Beatrice in white, walking with 2 woman friends. She is ignoring Dante because she had heard gossip about his infatuation with her. Like Petrarch’s, Dante’s love was unrequited; he is thought to have met Beatrice only twice; the first time, she was eight and he was nine years old. Holliday traveled to Florence for research to paint the locale accurately. This is Holliday’s best known painting. Maclintick says that reproductions of it were commonly displayed in boarding houses. 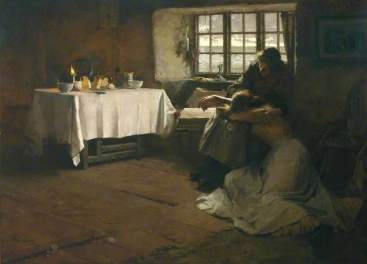 A Hopeless Dawn
Frank Bramley, 1888
oil on canvas 49 x 67 in
The Tate, London
photo from The Tate via BBC Your Paintings

Moreland, who relishes speaking of art and literature, makes an enigmatic statement: “The literary content of some Picassos makes The Long Engagement or A Hopeless Dawn seem dry pedantic studies in pure abstraction.”  The Long Engagement and A Hopeless Dawn are sad Victorian scenes. The engagement is long because the curate is too poor to marry his fiancee. The dawn is hopeless because the kneeling woman knows that her husband is lost at sea. When Moreland calls these “studies in pure abstraction,” perhaps he means that although the paintings were superficially realistic, their portrayal of emotion was so excessive that they were unrealistic.

We repeatedly read this conversation of Moreland and Maclintick, which ranges from Petrarch to James Joyce, looking for clues as to which Picassos were on Moreland’s mind. By the mid 1930’s Picasso was the richest, most famous, and perhaps most prolific living painter. Moreland might have been thinking of Picassos beyond our ken.

We have puzzled over what Moreland meant by the ‘literary content of some Picassos.” Is he talking about art featuring writers, about art illustrating writing, or about art telling a story? Picasso wrote poetry and plays and was friendly with many writers, but in the context of the other paintings Moreland was discussing, portraits of these friends, like Gertrude Stein, do not seem to us to have the  ‘literary content’ in question.

If Moreland is talking about art illustrating writing, many Picasso images merit consideration. Picasso illustrated over 50 books and articles. His Don Quixote has become much more widely reproduced than Dante and Beatrice, but this image is from 1955, so Moreland could not be referring to it in the 1930’s. However, in the 30’s Picasso was illustrating works like Ovid’s Metamorphoses and Aristophanes’ Lysistrata with etchings that are much less “dry and pedantic” than Hughes’ or Bramley’s work.

If Moreland is talking about art that tells a story, some works by Picasso qualify more than others. Picasso, along with Braque, is credited with inventing Cubism, one of the pioneering forms of Abstract Art.  While the real basis of some Cubist works is discernable, the style evolved to more abstract works that lack any evident narrative (see for, example, Picasso’s early collage, Still Life with Chair Caning), so that we do not think of these Picassos as ‘literary.’

The Tragedy
Pablo Picasso, 1903 oil on wood, 40 X 28 in The National Gallery of Art, Washington photo public domain in US from Wikipedia

During his Blue Period (1901–1904), Picasso literally had “the blues,” becoming severely depressed after the suicide of a friend. His paintings, monochromatic shades of blue, with attenuated but still recognizable depictions of the sad, poor, or oppressed, could match Victorian melodrama tear for tear. We do not know what befell the trio shown at the left, but we instinctively see them as a family and wonder about their pain.  The Tragedy is as much of a story picture as The Long Engagement or  A Hopeless Dawn.  We doubt that Picasso of the Blue Period is what Moreland had in mind when he is rejecting the sentimentality of Bramley and Hughes.

Maclintick cares little for art or novels, yet introduces James Joyce’s Ulysses  into the conversation.   We wonder if this is a clue to a different interpretation of Moreland’s statement. Some of Picasso’s later work, including paintings from the mid 1930s when Moreland and Maclintick were talking, told stories in much more symbolic, less direct ways, requiring more work from the viewer to understand the metaphors, just as Ulysses tells a story but is not the easiest novel to read.  We are thinking specifically of Guernica.

Guernica is full of anguish, showing a tragedy, not of an anonymous trio, but of a whole town devastated by bombing in the Spanish Civil War. The multiple distorted bodies and the iconography, particularly of the bull and the horse, have spawned many controversies about their interpretation.  This is literary modernism to contrast with the classicism of Dante and of Pre-Raphaelites like Henry Halliday.

Powell is showing us a Moreland who is sick of the sentimentalism and narrative literalism of the age he grew up in, and who is championing the modern taste for metaphor as representation.  After all, to the extent that Moreland is modeled on Constant Lambert, he is modeled on a composer who wrote music for Romeo and Juliet and Cymbeline, and the classical tales of Pomona and of Tiresias.  He must constantly have been struggling with how music, that most abstract of arts, could represent known stories without resorting to narrative literalism and sentiment.

We have used ‘literary’ as a launch pad for a selective recap of Picasso’s career and for flights of speculation about Moreland’s intent.  We are sure that Moreland would welcome further conversation.