Posted on February 1, 2014 by picturesinpowell

Jenkins discusses St. John Clarke’s interest in art and his suitability to write an introduction to The Art of Horace Isbister: “That a well-known novelist should take on something that seemed to call in at least a small degree for an accredited expert on painting was not so surprising as might at first sight have appeared, because St. John Clarke, although quieter of late years, had in past often figured in public controversy regarding the arts. He had been active, for example, in the years before the war in supporting the erection of the Peter Pan statue in Kensington Garden; a dozen years later vigorously opposing the establishment of Rima in the bird sanctuary in the same neighborhood”  [AW 26/19] Jenkins continues, reflecting on Clarke’s views on the Haig Statue and on Post Impressionism.

In 1902, J. M. Barrie published his first Peter Pan book, The Little White Bird, and commissioned Sir George Frampton to build a statue of Peter for the Kensington Gardens. In 1904 Barrie wrote his famous play about Peter and in 1906 adapted the Kensington garden portions of The Little White Bird for the book Peter Pan in Kensington Gardens.  Sir George Frampton, R.A. (1860-1928) was part of the late nineteenth century British New Sculpture movement, which concentrated on natural, life-like figures. Seven other castings of this beloved statue are displayed around the world. 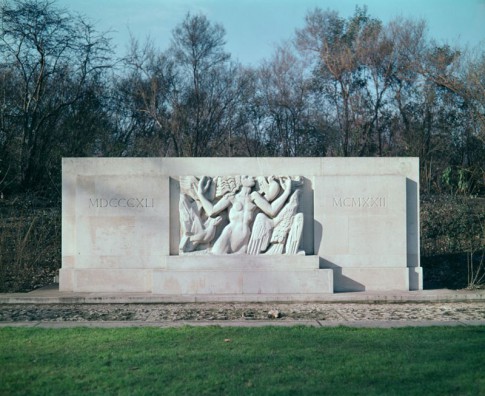 Rima, sculpted by Sir Jacob Epstein for the Kensington Garden bird sanctuary in 1925 is a distant departure from New Sculpture. Rima, another popular figure of children’s literature,  was a girl who lived the jungles of Venezuela in Green Mansions: A Romance of the Tropical Forest by W.H.M. Hudson (1904). St. John Clarke’s contrasting views of these two statues reflected public controversies in London in the late 1920s.  Epstein’s work was greeted by some as a grotesque atrocity, but others welcomed it. The critic Holbrook Jackson wrote:  “The statue of Peter Pan is only tolerable for the sentimental effect it has on children who have been wrongly brought up. Rima is one of the greatest examples of the sculpture of modern times.” In 1927, Rima was defaced with green paint; whether this was simple vandalism or an act of public criticism is unknown, but in August, 1928, Peter Pan was tarred and feathered, bringing tears to the eyes of many of its admirers; some believed that Epstein’s supporters were retaliating  for the green paint. In 1929, Rima got the tar and feathers. A week later a tar attack on another Epstein piece was foiled, and other attacks on Rima continued for years. Epstein quipped: “Michael Angelo’s David was stoned by the populace of Florence…so I feel I am in good company.”   We are still in Kensington Gardens but, in artistic terms, have come a long way from the Victorian monuments; in a few lines Powell both illustrates Clarke’s aesthetic politics and calls our attention to cultural history.