Posted on August 18, 2013 by picturesinpowell 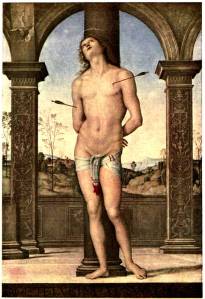 At the Louvre in about 1919, Nick and his parents run into Mr. Deacon, who has stooped over, magnifying glass in hand , to examine closely a painting of St. Sebastian by Pietro Perugino ( c. 1446-1524). [BM 14/10] Sebastian was a Roman centurion martyred about 286 for his conversion to Christianity. He has been painted many times with his characteristic iconography, wounded by arrows, tied to a post, but he was actually clubbed to death. Perugino painted St. Sebastian at least six times.  Mr. Deacon, “showing an unexpected grasp of military hierarchy — at least of an obsolete order,” commented that the real St. Sebastian, as a centurion, must have been older and more rugged than the youth shown by Perugino.

Perugino was one of the masters of the Quattrocento. His frescoes decorate the walls of the Sistine Chapel by commission of Pope Sixtus IV. He was among the first to paint with oil.

Mr. Deacon claimed that other pictures in the Louvre, attributed to Raphael, were actually Peruginos. Misattribution of paintings is an issue that  resurfaces later in Dance. Here we suspect that Mr. Deacon was showing his contrarian streak rather than his connoisseurship.  In the 1490s Raphael, an orphan, was placed by his relatives in Perugino’s workshop in Florence. His apprentice’s brushstrokes very likely grace more than one Perugino. In 2012  the Alte Pinakothek in Munich mounted an exhibit Perugino: Raphael’s Master, which in part addressed the question of why for the last half millenium Perugino’s reputation has been in the shadow of his contemporaries: Michelangelo, Leonardo, and Raphael.  Vasari (Lives of the Painters, 1568) praised Raphael and denigrated Perugino:

“I will not refrain from saying that it was recognized, after [Raphael] had been in Florence, that he changed and improved his manner so much, from having seen many works by the hands of excellent masters, that it had nothing to do with his earlier manner; indeed, the two might have belonged to different masters, one much more excellent than the other in painting. ”

During his lifetime Perugino’s peers, including Raphael’s father, had called him the ‘divine painter.’  Mr. Deacon seems to have a natural affinity with artists whom history has devalued.