A Dance to the Music of Time

A Dance to the Music of Time – Poussin

A Question of Upbringing (QU) opens in late 1921 at Eton. The narrator, as yet unidentified, watches workmen around an outdoor fire on a snowy day. “For some reason, the sight of snow descending on fire always makes me think of the ancient world … These classical projections, and something from the fire, suddenly suggested Poussin’s scene in which the Seasons, hand in hand and facing outward, tread in rhythm to the notes of the lyre that the winged and naked greybeard plays. The image of Time brought thoughts of mortality: of human beings, facing outward like the Seasons, moving hand in hand in intricate measure, stepping slowly, methodically sometimes a trifle awkwardly, in evolutions that take recognisable shape: or breaking into seemingly meaningless gyrations, while partners disappear only to reappear again, once more giving pattern to the spectacle: unable to control the melody, unable, perhaps, to control the steps of the dance.” (QU 5-6) 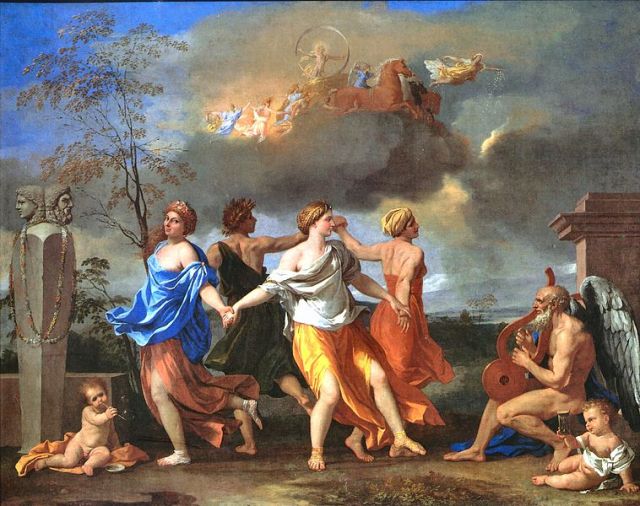 A Dance to the Music of Time
Nicolas Poussin, 1634-1636
oil on canvas, 33 x 42 in
The Wallace Collection, London
photo in public domain from Wikimedia Commons

Poussin, born in France, painted The Dance during the heart of his career spent in Rome. He painted mythological and religious scenes in a life-long effort to synthesize Renaissance notions of Classical  harmony with the energy and emotionalism of  the Baroque .  The Dance was commissioned by Giulio Rospigliosi (later Pope Clement IX) and painted between 1634 and 1636. Rospigliosi reputedly designated the four dancers as Pleasure, Riches, Poverty, and Work, but they also became known as the four seasons. The picture was purchased by Richard Seymour-Conway, 4th Marquess of Hertford in the Fesch sale in Rome in 1845, where it was sold under the title La Danse du Saisons. Seymour-Conway’s heirs established the Wallace collection as a public museum in 1897 and by at least 1913 the painting was listed in the Wallace catalog as A Dance to the Music of Time.

In To Keep the Ball Rolling (pp 317-8) Powell describes how this painting figured in his concept of the novel:

“At a fairly early stage … I found myself in the Wallace Collection, standing in front of Nicolas Poussin’s picture given the titlle A Dance to the Music of Time. An almost hypnotic spell seems cast by this masterpiece on the beholder. I knew all at once that Poussin had expressed at least one important aspect of what the novel must be. The precise allegory which Poussin’s composition adumbrates is disputed. I have accepted the view that the dancing figures … are the Seasons … Phoebus drives his horses across the heavens; Time plucks the strings of his lyre.

There is no doubt a case … that the dancers are not easily identifiable as Spring, Summer, Autumn, Winter. They seem no less ambiguous as Pleasure, Riches, Poverty, Work, or perhaps Fame. In relation to my own mood, the latter interpretations would be equally applicable … The one certain thing is that the four main figures depicted are dancing to Time’s tune.” [1]

[1] Powell, AP To Keep the Ball Rolling: Faces in My Time (Heinemann, 1980) Available at http://www.anthonypowell.org/home.php?page=M03

This entry was posted in Uncategorized and tagged dance to the music, nicholas poussin. Bookmark the permalink.

3 Responses to A Dance to the Music of Time